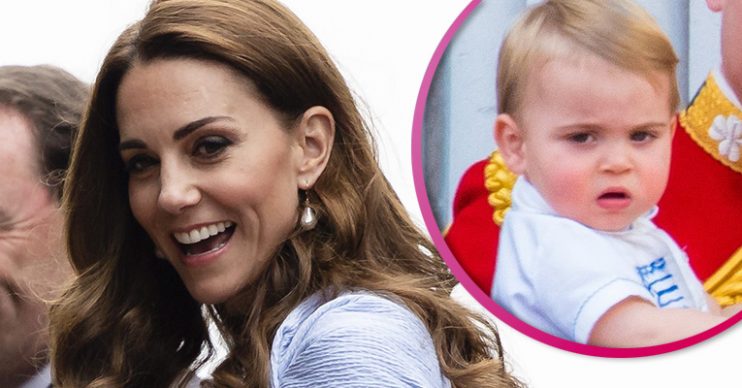 The Duchess of Cambridge was gifted a pair of trainers for Prince Louis at Wimbledon yesterday.

The mum-of-three attended the tennis tournament on Sunday alongside her husband William, Duke of Cambridge.

But in a very sweet moment, Kate was handed a pair of tiny shoes by former tennis world champion Stan Smith.

Read more: Kate and William are all smiles as they arrive at Wimbledon

And to make things even cuter, the trainers had “Prince Louis” emblazoned across it in gold.

The trainers were also signed by Stan himself.

Stan had previously won Wimbledon back in 1972.

Kate, who is an avid tennis fan, attended the event yesterday to watch Roger Federer and Novak Djokovic.

Kate and William arrived several hours before the 2pm match, and took time to chat to Wimbledon employees and wave to the crowds.

The couple were pictured chatting to the ball boys and girls, as well as stopping to talk with several Wimbledon officials.

The day before, the Duchess had attended another match alongside her sister-in-law Meghan, the Duchess of Sussex.

Kate, wearing a bespoke green D&G midi dress, and Meghan – in a white pleated skirt and blouse – arrived to the venue in south-west London separately, with Kate thought to have lunched with former champions beforehand.

Kate and William aren’t the only tennis fans in their family.

It was recently revealed that their oldest child, son Prince George, had a private tennis lesson from Roger.

Last week, the tennis legend confirmed he had been to Kate’s parents Carole and Michael Middleton’s home to meet George, five.

Kate had earlier revealed that Roger was George’s favourite player.

Speaking to reporters about George being a huge fan of him, Roger said: “At that stage it’s all about just touch the ball, it’s already good. Same with my boys.

“I think I have a little advantage that I actually spent some time, you know, with him.

“I’m the only player he’s ever met. Then you have a little head start in who is your favourite player.”