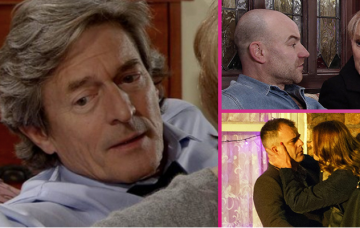 Get ready for the drama!

Coronation Street has released a trailer heralding the return of Phelan to Weatherfield, teasing the terror that the residents who have most wronged him will face.

In the dark and rainy clip Eileen, Nicola and Seb, and Sarah and Gary each come face to face with their murderous nemesis.

But which of them are in peril? The comeback of Corrie’s most terrifying ever character coincides with the soap’s week of 9pm shows – screened after the BGT live semi-finals.

The frightening denouement of the Phelan plot is just one of highlights of the soap’s summer schedule… here’s what else we’ll be glued to over the coming months!

Drama for Tim and Sally

Departing Corrie boss Kate Oates has hinted there are some big storylines coming up for Tim and Sal, telling metro.co.uk: “Things get massive for the Metcalfes – they will be big right up until Christmas.

“I can’t promise they will still be the Christmas story as Iain [Macleod] is taking over from me but they have huge material for them that will see Tim and Sally at their best.”

Coronation fans rejoiced at the news that Nigel Havers would be returning to the cobbles as his villainous character, Lewis Archer. And it seems that Kate is just as excited as we are…

“We have Lewis – king of cads! He is returning and I would have him for as long as Nigel Havers would want to stay as he works brilliantly with Sue Nicholls. I love that existing dynamic that he played both mother and daughter.”

Big news for Steve and Tracy

Kate also told metro.co.uk that she is excited about the direction Steve and Tracy will be heading in throughout the second half of this year.

“I see them as a bit of a fiery Jack and Vera. They fit into old school Corrie but they are not old school actors – they are fresh with it. Kate Ford benefits from a much more rounded type of storytelling. She is fantastic.

“When you look back at the layers she has played alongside Deirdre, Blanche, Amy, Steve and so many other relationships, there is such depth to this character. We can still see the darker side of Tracy, she’s still a superbitch – but a much more believable one.”

It was recently confirmed that Charles Lawson would be back on set to reprise his role of Steve’s dad, Jim.

He’s set to be released from prison where he is serving time for armed robbery… but his comeback won’t necessarily be a happy one.

Kate hinted: “He’s going to be coming back with a lot of resentment because of what Steve did – from his point of view, he has been rotting in prison and no-one cares.

“We also played a story 18 months ago where it seemed like Steve might have inherited a genetic disease from his dad but no-one went to see Jim to ask if he was okay. We have a great story to play with that.”

Hold on to your hats – it’s going to be a rollercoaster ride in Weatherfield!

Which of these storylines are you looking forward to the most? Leave us a comment on our Facebook page @EntertainmentDailyFix and let us know what you think!