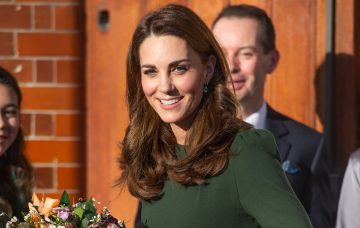 During her day full of commitments, she also revealed to members of the public a scary incident involving her youngest child, Prince Louis.

After her visit to see Archie, Kate went onto visit the newly restored Teleprinter building at Bletchley Park near Milton Keynes to commemorate the 75th anniversary of the D-Day landings.

Hello! reports that as she was leaving, one woman stepped forward and congratulated Kate on her “lovely family”.

Thanking the woman, Kate went onto tell her about her mischievous toddler Louis – who turned one last month.

She said: “I turned around the other day and he was at the top of the slide – I had no idea!”

Kate, who is married to William, Duke of Cambridge, said the little royal toddler is “keeping us on our toes”.

Kate was also given some cuddly toys from a group of primary school codebreakers, who she had met earlier in the day.

She was given a squirrel, fox, owl and rabbit for Prince George, Princess Charlotte, Prince Louis and the Duke and Duchess of Sussex’s baby Archie.

Kate said to the children: “They love wild animals. They will look after these”

A busy few weeks has seen two birthdays in the Cambridge household, with both Princess Charlotte and Prince Louis celebrating birthdays.

Kate and husband William have also been celebrating becoming aunt and uncle for the first time.

During the launch of the first King’s Cup Regatta at the Cutty Sark last week, William mistakenly told an adoring crowd: “Yes absolutely, uncle, second time for me.”

He then pointed at his wife and added, “and you as well”.