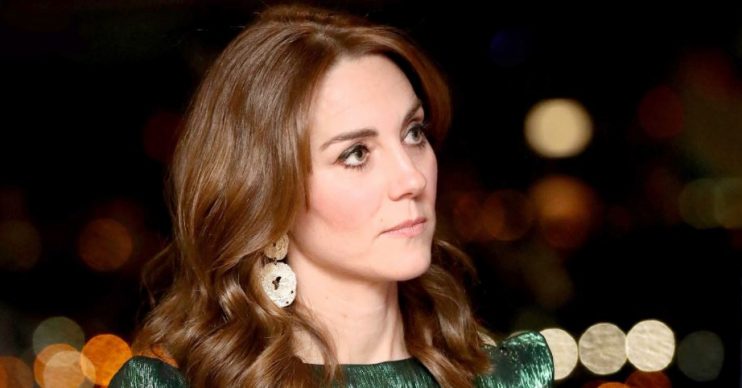 The Duchess of Cambridge stunned in green as she toured the famous Guinness Storehouse in Dublin with Prince William.

Kate Middleton, 38, wore a glittering emerald green dress for a reception at the famous brewery and tourist attraction, where she was pictured enjoying a cool pint of the black stuff.

According to Town & Country, the garment was by the brand The Vampire’s Wife.

For the engagement yesterday evening (March 3 2020), Kate and William arrived at the Storehouse at 7:30pm and posed outside the site’s iconic branded gates.

The Cambridges were then taken up to the complex’s Gravity Bar, where visitors can enjoy a pint of Guinness or two at the end of the tour while taking in sweeping views of Ireland’s gorgeous capital.

William was also snapped taking a sip of Guinness which, according to the Storehouse website, is now brewed in 49 countries around the world.

The Duke is reported to have told those gathered at the reception, which was hosted by Britain’s Ambassador to Ireland, that he and Kate were “excited” to be there.

He also pointed out he was retracing the footsteps of his grandmother the Queen, who visited in 2011.

“Ladies and Gentlemen, let me tell you it is not often that I find myself following the Queen to a pub!” he joked, adding: “But I am looking forward to testing for myself the theory that Guinness tastes even better in Ireland than overseas!”

It is not often that I find myself following the Queen to a pub!

Earlier in the day, when the royal couple were pictured arriving in Ireland for the start of their tour, Kate was also pictured in green in an apparent tribute to the country.

As she stepped off a plane at Dublin International Airport, the Duchess wowed in an emerald jacket worn over a floral-patterned green dress.

She matched the outfit with a pair of emerald green shoes and a lime green bag.

The couple’s tour is set to take them to parts of Dublin, Galway, Meath and Kildare and comes at the request of the Foreign and Commonwealth Office.

A statement on the trip from the palace revealed it would “focus on the relationship between the two countries, and build on the theme of remembrance and reconciliation”, as with the Queen‘s visit nine years ago.

What do you think of Kate’s outfits so far? Leave us a comment on our Facebook page @EntertainmentDailyFix and let us know.