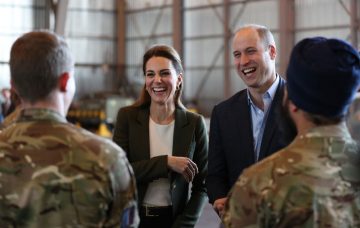 Duchess drops the bombshell during royal visit to Cyprus

The Duchess of Cambridge let slip that the royal couple have silly domestic arguments just like the rest of us during a tour of Cyprus.

According to People, Kate said Wills was a “nightmare” for the habit that clearly drives her up the wall.

The couple were opening a new military recreation centre when the heir to the throne spotted its new yellow sofas, and was reminded of his wife’s biggest bugbear.

Joking with the servicemen and women, William said: “Keep the pizzas off the sofas!”

Overhearing her husband’s quip across the room, Kate replied: “You’re a nightmare with that!”

She also told crowds at RAF Akrotiri on the Mediterranean island that Prince Louis is already learning to wave at just seven months old.

It is, after all, one of the most important parts of any royal’s public duty.

Mirror Online reported that Kate, 36, stopped to talk to 32-year-old Rhian Davis who was carrying 10-week-old daughter Dorothy in a sling.

Rhian revealed afterwards: “She asked whether she was sleeping through the night

“And she told me that Louis is starting to wave.”

Does your other half drive you mad with the silliest of habits? Leave us a comment on our Facebook page @EntertainmentDailyFix and let us know what you think!