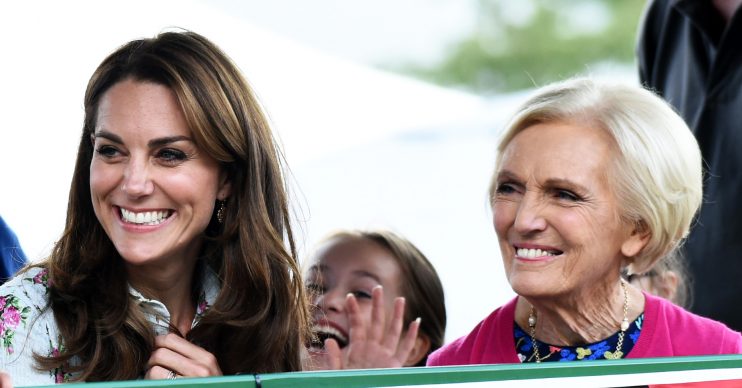 Duchess goes Back To Nature

Kate Middleton looked as pretty as a picture as she opened her Back To Nature garden, just days after Princess Charlotte started school.

The Duchess of Cambridge wore a sky blue Emilia Wickstead floral midi dress and her trusty wedges as she hitched a ride on the back of a tractor.

Taking up the seat next to her was none other than the former queen of The Great British Bake Off Mary Berry.

The two were at RHS Wisley in Surrey, where the garden – inspired by the one Kate designed for this year’s Chelsea Flower Show – was unveiled.

Kate and Mary – a RHS Ambassador – looked to be having a whale of a time as they chatted and laughed together.

The duchess also took time to interact with some of the children playing in the garden, which has a huge treehouse as a centrepiece.

Kate said: “It’s really important the kids start to understand nature, and care for it, so they can protect it as well.”

She continued: “With Instagram, everything is so visual. It’s nice to sit and feel.”

The duchess was also given sweets for Prince George by youngsters at the garden.

“He’ll love them,” Kate told the children as she accepted the gift.

The RHS’s Sue Biggs added: “We are grateful to the duchess for the incredible impact that this Back to Nature collaboration has had.”

She added: “There is no doubt that this project, through her passion and vision, has highlighted that access to natural environments and green spaces isn’t just a nice to have, it’s vital to have.”

Before her Back To Nature garden opened at the Chelsea Flower Show earlier this summer, Kate took along kids George, Charlotte and Prince Louis to check it out.

Asked by his dad Prince William how many marks out of ten young George would give his mum’s garden, the future king replied: “Twenty!” to which William exclaimed: “Twenty out of ten? That’s pretty good, I think Mummy’s done well.”