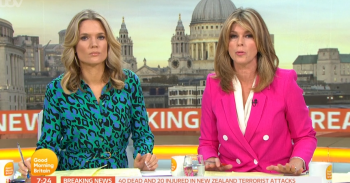 Kate Garraway has revealed she’s trying to contact family and friends in New Zealand after a horrific mosque shooting.

At least 49 people have been killed, and at least 20 others seriously injured, in the mass shootings at two mosques in Christchurch on Friday.

One of the shootings was live-streamed on Facebook for 17 minutes by the gunman.

Kate told viewers: “It’s utterly cowardly but it points to a horrific bravado that they would do that and I think it is just disgusting. Everyone is shocked and the people of Christchurch are.

“I’m sure many of you at home will have relatives in New Zealand and it will be very alarming for you. Friends there.

“I’ve got relatives and friends in Auckland and Christchurch myself that I’m trying to get in touch with.

“So we will definitely make sure that we keep you posted on everything that is happening there.”

At least 49 people have been killed and multiple others injured in the mass shooting.

48 people were being treated for gunshot wounds, including 20 in a serious condition.

Police confirmed they have arrested three men and a woman in connection with the terror attack and have charged a man in his late-20s with murder.

The man will appear in court on Saturday morning.

The Prime Minister of New Zealand Jacinda Ardern said Friday was “one of New Zealand’s darkest days” and that the events represented “an extraordinary and unprecedented act of violence”.

New Zealand Shootings: Prime Minister Jacinda Ardern has given a moving statement in reaction to the shootings. pic.twitter.com/kq9hstfdTa

The worshippers in Christchurch were killed during Friday prayers.

One suspected shooter reportedly shouted “let’s get the party started” before opening fire.

The gunman live-streamed footage of his rampage to Facebook.

The video – which Facebook said it was working on removing any copies of – reportedly showed him firing at men, women and children from close range inside the Al-Noor mosque.