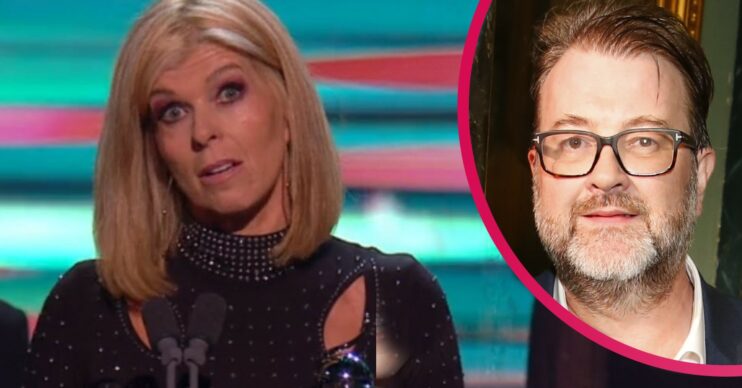 Kate Garraway has revealed the moment she told her husband Derek Draper about their NTAS win.

The show followed Kate and Derek’s lives as he battled COVID-19 and its after-effects in hospital.

Kate received a standing ovation in the O2 arena and got emotional as she made a speech.

The star said: “I just want to say to all the Darceys, the Billys, the Dereks, and Derek’s family that whatever you’re going through and however you’re affected, you’re not forgotten.

Meanwhile, Kate shared a photo to her Instagram account this morning showing the moment she FaceTimed Derek to tell him about their win.

The photo shows Kate holding up the NTA as Derek smiles on the other end of the phone.

Kate said: “Wow. Thank you so so much.

“Have been in such an emotional daze all night I failed to get a single photo of me or the brilliant @flickerproductions team who made #findingderek @theofficalntas!!

“But maybe this is the photo you most wanted to see anyway – Me FaceTiming Derek (via Darcey’s phone!) to tell him we had won! From him and from the bottom of our family’s hearts THANKYOU.

“For all who are struggling on and holding on to hope – this is for you.

“And to all the other wonderful nominations in the category.”

Her followers were emotional over the post as one person said: “Congratulations Kate! So well deserved.”

Another wrote: “I don’t think anyone had a dry eye for you Kate. Very well deserved.”

Piers Morgan wrote on Twitter: “Love her. Congrats ⁦@kategarraway – one of the bravest most inspiring people I’ve ever known.

Love her. ❤️
Congrats ⁦@kategarraway⁩ – one of the bravest most inspiring people I’ve ever known. People have no idea of the true hell she’s going through because she’s always putting others first & never complains. Just pray her Derek comes out the other side. #ntas pic.twitter.com/uhfT7oIsXs

“People have no idea of the true hell she’s going through because she’s always putting others first & never complains. Just pray her Derek comes out the other side.”

Alex Beresford said: “His eyes say it all! So happy for you.”