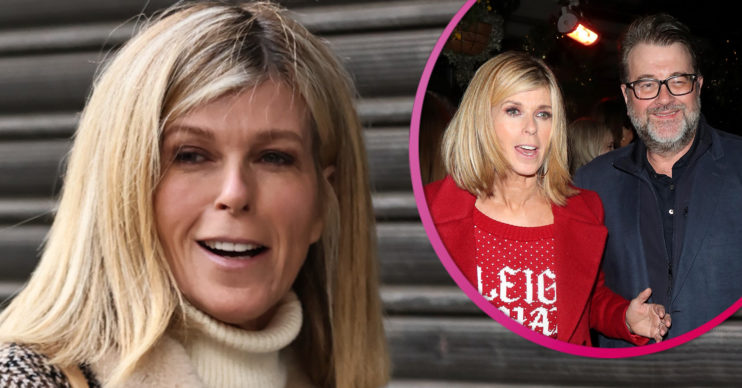 Kate has opened up about Derek's COVID-19 battle

Kate Garraway has revealed the moment her husband Derek Draper was put into an induced coma.

The 53-year-old GMB star explained how Derek didn’t get the chance to speak to their two children Darcey and Billy just before being put unconscious.

What did Kate Garraway say about her husband Derek?

Writing in her new memoir The Power of Hope, which is being serialised by the Mail on Sunday, Kate opened up about how hard last year was.

The presenter began by sharing how she thought 2020 would truly be her year. After all, she’d just survived the jungle for I’m A Celebrity on ITV.

However, she didn’t realise what 2020 had in store for her.

Read more: Kate Garraway news: Star reveals husband Derek’s words to her as he was taken to hospital

The star discussed how Derek began to feel unwell but doctors thought it might have been sinusitis.

In her recount, Kate shared that when she became concerned over Derek’s breathing she reached out to GMB‘s health expert Dr Hilary Jones.

His words were that she needed to call an ambulance immediately.

Once in hospital, Kate has opened up about the texts she received from Derek.

Former I’m A Celeb contestant Kate shared that Derek had already thought the worst would happen.

He texted her: “I want you at the funeral, but I’m not sure about the children.”

Before he was put into a medical coma, Kate also shared that her two children didn’t get to say goodbye as doctors raced to induce him and save his life.

The star wrote: “‘Wait, wait!’ I almost screamed. ‘Here’s Darcey and Billy to say I love you.’

“‘Stop, Kate,’ said the stranger’s voice. ‘He’s gone under. He can’t hear you. We’ll call you later when he’s settled, but we have to go now.’

“The line went dead. I suddenly felt alone, achingly alone. I didn’t know if I would ever hear Derek’s voice again.”

How is Derek now?

Derek has now been able to return to the family’s London home. However, he isn’t fully recovered yet and is battling the effects of long Covid.

Kate spoke out on GMB this week, as she said: “It’s been wonderful having Derek at home and lots of little positives, I think.

“And whether those are positives because it is genuinely helping his cognition being at home or whether it’s just because I’m there to see the little things – whereas I couldn’t go in [to hospital] before and we were on FaceTime and stuff, I don’t know.

“But it feels positive, so little moments of reaction.”

Kate’s book The Power of Hope is due for release on Thursday April 29.