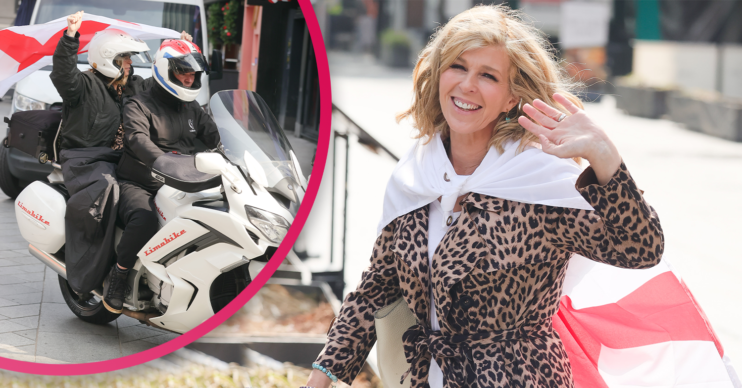 The star arrived at work on the back of motorbike

Kate Garraway put her fears for husband Derek Draper aside as she arrived at work earlier today (July 2).

The Good Morning Britain presenter was heading from ITV to Smooth Radio, where she also has a show.

And, with no time to spare between the jobs, Kate roared into London’s Leicester Square on the back of a motorbike.

What did Kate Garraway wear to work today?

Clearly in a good mood, Kate was seen draped in a huge England flag, doubtless ready to cheer on the boys in the Euro 2020 quarter final tomorrow night.

But that wasn’t all Kate was wearing.

As she took off her helmet she flashed waiting photographers a beaming smile.

Clearly putting her worries about husband Derek aside, Kate looked full of the joys of spring as she headed inside the radio studio.

As well as a smile and the flag, Kate wore a pair of bootleg jeans, trainers, a white T-shirt and a leopard-print rain mac.

It’s not the first time Kate has showed her support for the England team.

During their last match she uploaded a picture of herself wearing a red top and a red and white curly wig.

In the background of the photo, fans could see the GMB presenter’s living room was draped in England flags.

Clearly excited for the next match, all eyes will surely be on Kate’s social media tomorrow night to see how she celebrates should England win.

So how is Kate’s husband Derek Draper doing?

In May, Kate revealed that Derek couldn’t really move or communicate.

She told Andrew Marr: “There are moments where there’s up, you feel you know he’s in there. He has a lot of memory.

“But the accessing of it is very limited. He’s a long way from the Derek Draper that you know, Andrew, but he’s home and he’s alive.”