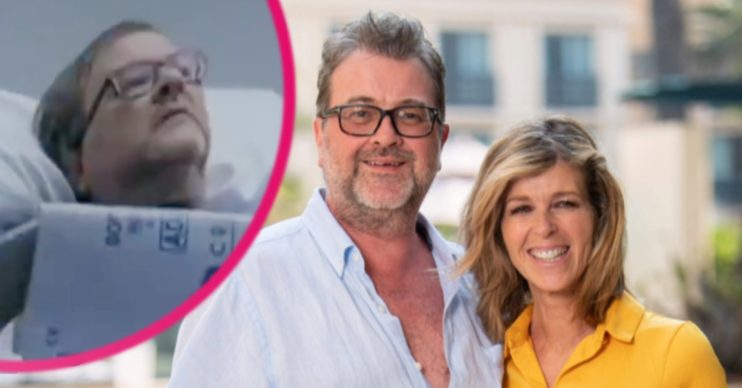 Kate Garraway latest: A timeline of Derek’s health after one year in hospital

After 12 months in hospital, we take a look back at Derek's journey

The 53-year-old former political advisor was taken into hospital on March 30 2020.

Despite showing small signs of improvement, the dad-of-two still remains in care.

Kate Garraway latest: When was Derek taken into hospital?

Derek was rushed to hospital with coronavirus in March.

At the time, Dr Hilary said: “I had spoken to Derek and I was concerned.

“I was really concerned just by the way he was speaking and his breathlessness and I told him to do a simple test, not a diagnostic test.

“All I asked him to do was hold his breath and see how long he could hold it for, and it was less than 10 seconds. I said ‘Okay look, now is the time to call an ambulance’ and this was when he was admitted.”

Days later, he was induced into a coma.

Over the past year, Kate has rarely managed to visit her husband.

However, she did visit Derek with her two children over Christmas.

Speaking on GMB, Kate said: “(Christmas) was tough, wasn’t it? It was tough for everybody.

“I knew it was going to be tough. There was a lovely moment which we did have, we did over the period get to see Derek and the children did, which was the first time they were able to do that.

“Of course it was very heightened with emotion because he’s very changed. It was so wonderful but then also it sort of amplified how sad everything was and how different it is.”

Meanwhile, on Derek’s 219th day in hospital, he showed emotion for the first time.

What is the latest with Derek?

Despite his struggles, Kate is remaining positive her husband will pull through.

During her recent ITV documentary, Finding Derek, the presenter appeared relived after Derek woke up from his coma.

“I’m so proud of you, you’re just so brilliant. Every day we’re getting closer to coming home and being with the kids.”

While Derek is now free of coronavirus, the disease has also affected his heart, kidney and lungs.

Kate recently told The Mirror: “He has changed. Derek is physically very affected.

“His legs are like sticks, he has no muscle left. In terms of his movement, he’s physically affected.”

Furthermore, Kate has converted their family home to make it accessible for Derek.