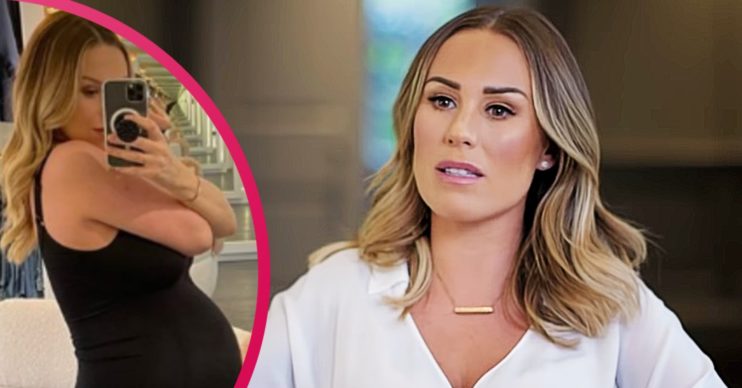 The reality star is expecting her first child very soon

Kate Ferdinand, weeks from welcoming her baby, has revealed she was forced to rest after tearing her stomach muscles.

The former TOWIE star, who is expecting her first child with husband Rio, took to Instagram to update her followers on her pregnancy journey so far.

Opening up yesterday (Tuesday, December 8), Kate admitted she was exercising regularly before suffering from the painful injury.

What did Kate Ferdinand say?

Kate, 29, explained: “I tore my stomach muscles six or so weeks ago and was on rest for three weeks. I found that really difficult and my mind was all over the place!!

“So now I’m just happy and grateful. I can be out and walking and doing bits and bobs around the house.”

She added in a separate post: “I have trained for the majority of my pregnancy: pilates and light gym work. But after tearing my muscles I was advised to rest so I did that for three weeks and am now just taking it easy and walking daily as I don’t want to damage anything any further.

“It is advised to stay active so I am trying to keep moving as much as possible.”

Meanwhile, Kate recently admitted to struggling with her mental health during her pregnancy.

In a chat with Women’s Health podcast, the star called lockdown an “experience”.

She said: “Something I’ve struggled with is being pregnant with my first biological child and still being a mum.

“So I felt I had all these new experiences but I was still a stepmother or mother figure to three kids. I struggle with my mental health.”

Kate’s post follows shortly after the expecting star paid an emotional tribute to Rio’s late wife Rebecca on what would have been her 40th birthday.

On what would have been a milestone birthday, Kate joined Rio as he met up with Rebecca’s parents to mark the occasion.

A source told The Sun: “Kate was determined to attend the gathering despite being heavily pregnant and not finding it easy.”