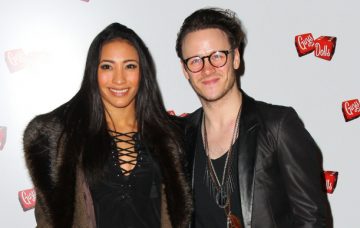 They split in March after three years of marriage

The professional dancers announced in March they had split following three years of marriage.

But they have remained the best of friends and are currently touring together in their stage show, Kevin and Karen Dance Live.

In a new interview with Mail Online, Karen said she’s not currently dating or thinking about dating, but she’d be happy if her former partner found love again.

“I’d be okay if Kevin started dating. It’s one of those things where if he’s happy, I’m happy. You don’t need to have drama, you don’t need any negativity and you just need the same mindset and the same goal.”

Karen and Kevin have frequently stressed how amicable their separation has been.

Rumours about Karen and Kevin’s marriage breaking down began during the last series of Strictly, but it was only in March they confirmed their split during a joint interview on BBC Radio 2’s Chris Evans show.

Then, in another joint interview on This Morning, the couple spoke about their friendship and why they would continue to work together professionally on tour.

Karen said: “We have been dancing together for seven years and that bond we created as friends, first of all, and then as professional dancers is very strong. So to let go of all that just because our private life didn’t work out the way we wanted it to…”

Kevin added: “Dancing is how we met and what our relationship has been based on, what we’ve always done for the last seven years, and what we will continue doing.”

They’ve also said splitting has unleashed a new creative side to both of them.

Kevin told BBC Breakfast: “Privately our situation has changed but professionally we’re still dancing together and stronger than ever, really. As I said the other day, dancing is the glue that holds us together and it’s how we met and we’re excited to go on tour.

“Since we’ve been upfront and honest about everything it’s unlocked this new creativity and new ideas coming out. As performers, you want to come from a place of truth, so it has unlocked all this new stuff we’re excited about.”

Karen then said: “It hasn’t changed our chemistry and passion on the dance floor.

“If anything, we’re still best friends and we care about each other and respect each other as performers. This guy is amazing. I can’t believe sometimes I’m dancing with him!

“The energy we want to bring and the positivity. And from the fans as well. They’ve always supported us and it’s great to hear their feedback and to see them coming to support us. It’s fantastic.”

It was confirmed this week that both Karen and Kevin will return to Strictly Come Dancing for the 2018 series.

Karen told fans: “Thrilled to be back on Strictly for my seventh series. Longest standing female pro!”

Kevin added he was also “thrilled” to be returning.