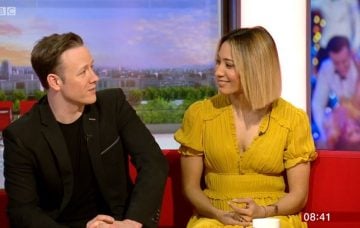 It could be THREE rather than two!

Strictly Come Dancing stars Karen and Kevin Clifton have hinted they could be joined on tour by a fellow professional from the BBC show.

The couple are hitting the road together in May, despite announcing last week they are divorcing after three years of marriage.

Karen and Kevin, both 35, have insisted they remain best friends and, if anything, the split has made them even stronger as a professional dancing duo.

So, naturally, they’re excited about their upcoming tour.

And appearing on BBC Breakfast on Monday morning, they revealed a THIRD professional from Strictly has been in talks to join them!

Kevin said: “We’re in talks at the moment with one of the other Strictly professionals. We’re just waiting to see but it looks like it’s going to happen! I can’t say yet, though, as it’s not signed!”

He added that the tour features a “massive 13-piece orchestra, two singers, six extra dancers” and has been directed by Strictly’s creative director Jason Gilkison.

Kevin gushed: “He’s the best in the world at this style of dancing – he’s absolutely the best.”

As for whether Karen and Kevin will return to Strictly this year, they both said they simply don’t know yet.

“We sort of sit by the phone hoping we’ll get that call,” said Kevin.

“We would both love to be back and both adore being on Strictly. It’s a massive part of our lives and we owe so much to Strictly. We know we wouldn’t be able to do the things we’re doing like this tour if it wasn’t for Strictly putting ballroom dancing on the platform it’s on.”

Kevin added: “We love the show and, of course, we want to get that call.

“We sort of leave that half of the year free in our diaries in hope.”

The couple’s tour is continuing as planned despite last week’s confirmation that Karen and Kevin are divorcing.

They confirmed the split on BBC Radio 2 following months of speculation, but both said the separation has actually made them stronger as a duo and more creatively inspired for the tour.

The tour starts May 22 in Northampton and runs until July, wrapping up in Dublin.

Karen and Kevin are currently auditioning for “amazing, new, raw,energetic and full of star power dancers” to join the tour, with a casting call on March 22 in London.

“This tour is something we’ve been dreaming about for a lot of years. Last year’s tour was so amazing and had such great feedback,” said Karen. “And this year we are bringing in new dancers, our singers, our orchestra and amazing choreography.

“It’s pretty much about all of our inspiration and what shaped us to be the dancers we are today.”

Do you want Karen and Kevin back on Strictly? Leave us a comment on our Facebook page @EntertainmentDailyFix and let us know what you think!