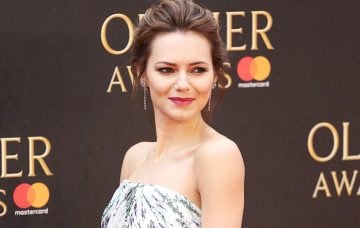 A double whammy of good news for the ex-EastEnders star!

Kara Tointon has confirmed she is engaged and expecting her first child.

The former EastEnders actress, 35, has revealed she and her partner Marius Jensen are to marry and she’s over the moon to be starting a family with him.

She told Hello! magazine: “It is an incredible time. It is the biggest life-changing moment when you have this little human being coming into your life that you are yet to meet. I can’t wait for motherhood and all the challenges it will bring.

“For me it was always about meeting the person that you know is the one you want to share this experience with. Marius and I said, ‘If it happens, we are ready, but we won’t plan,’ and then it happened quite quickly.”

The Mr Selfridge star hinted earlier this year that she and chiropractor Marius had got engaged, after she was seen wearing a diamond ring on her engagement finger.

They told Hello! that Marius popped the question while they were at home in March, a week before they went on holiday to India.

He said: “I had planned for a big proposal on the beach in India on holiday but I am not very good at keeping secrets. I’m someone who gives people their Christmas presents a week early… and so instead it just happened here at home, one Sunday morning, the week before we went away.”

Kara – who has previously been in relationships with TV stars Matt Johnson and Joe Swash – was spotted with a huge diamond ring on her left hand in March, but remained tight-lipped when quizzed about the pair potentially marrying.

She said at the time: “I’m not saying anything – I cringe when I read about my love life.”

Pregnancy rumours began swirling in August when Kara was seen touching her stomach while attending a film premiere with Marius in London.

She’s always been incredibly private about her life away from the spotlight, telling The Scotsman last year: “No, sorry, I don’t talk about any of that because I cringe when I read it.

“In the past I just used to talk about everything, because well, why wouldn’t you? But then you have to read it and you just feel sick about yourself, so no, I don’t bother any more.”

Congratulations to Kara and Marius!

Leave your well-wishes for Kara and Marius at our Facebook page @EntertainmentDailyFix.