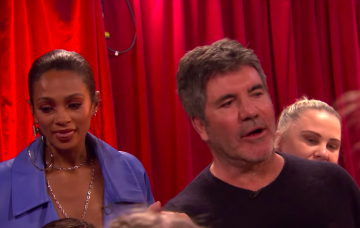 They wanted to greet a very special act

The Britain’s Got Talent judges were in tears as they made their first backstage visit in history to speak to Manchester bomb survivor Hollie Booth and her dance troupe Rise.

Simon Cowell, Amanda Holden, David Williams and Alesha Dixon left their seats after the group’s emotional audition to speak privately with the group.

David told them: “All of us judges wanted to say hello to you in person.”

Simon then told the choreographer: “That was quite incredible.”

He then told Hollie: “Hollie you’re a winner.”

On stage, Simon told her: “Hollie, to get through what you went through and to come out here and turn a ­negative to a positive is quite unbelievable.

“Because these people are cowards and the fact you come on stage and make such a ­positive statement with your friends, I am very proud of you.

Alesha Dixon told them: “You are all remarkable women, all of you, and that was probably one of my favourite moments on the show ever.”

David added: “It was so beautiful and moving, it almost didn’t seem real.

“It’s the most beautiful performance I’ve ever seen.”

Amanda, with tears in her eyes, called it an “amazing audition”.

Viewers were in floods of tears too.

One tweeted: “#BGT those girls performing had me crying omg Hollie is such a strong girl and I wish her nothing but the best!! so amazing.”

Another added: “Rise were incredible on Britain’s Got Talent tonight, i started crying the second One Last Time started playing.

“I have so much respect for Hollie and the rest of the troupe, you’re all inspirations.”

What did you think of Rise’s audition? Let us know by commenting on our Facebook page @EntertainmentDailyFix!