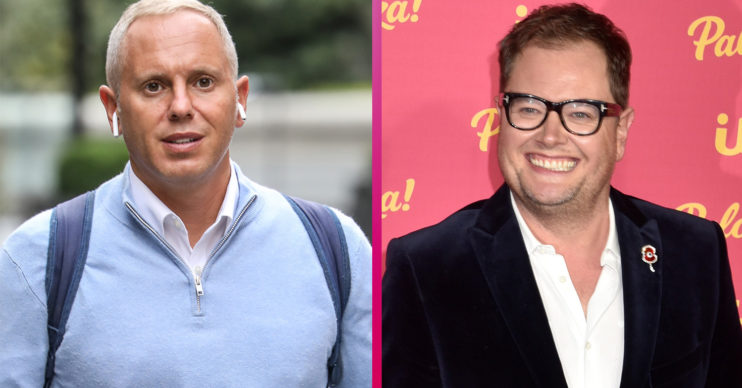 Robert has Alan Carr in his sights

Judge Robert Rinder says he’s ‘two-stone’ overweight according to the NHS and has taken drastic action to shed the pounds.

The daytime TV star and former Strictly Come Dancing contestant, 42, revealed on social media that he has entered into a contest with Alan Car in a bid to get into shape.

According to the NHS website, I’m 2 stone over my recommended weight. I needed a bit of a push so have entered into a contest with Alan Carr. From tonight we have 2 months to get as close as possible to our ‘healthy’ BMIs. Furthest away has to buy the other a cheeseburger. pic.twitter.com/7zZ62Diq6H

Robert took to Twitter to update his 106,000 followers on his weight.

Showing himself standing on a set of scales, he told fans that he’s ‘two stone over [his] recommended weight”.

He captioned the image: “According to the NHS website, I’m two stone over my recommended weight.

“I needed a bit of a push so have entered into a contest with Alan Carr.

“From tonight we have two months to get as close as possible to our ‘healthy’ BMIs.”

He concluded: “Furthest away has to buy the other a cheeseburger.”

How did Robert’s followers react?

This Morning doctor, Dr Ranj Singh, was the first to respond.

“Lockdown has not been kind to me,” the doc said.

Another follower said: “I’m also in that ‘special’ gang… who knew lockdown would inflict prosecco pouches on everyone.

“Look forward to seeing the competition hot up!”

I don’t know if you know, but next month is Childhood Cancer Awareness Month and I’m proud patron of Neuroblastoma Uk and you can buy these snazzy gold ribbons, pins and bracelets from their website www.neuroblastoma.org.uk to help their fight. Be warned they also have t-shirts coming out which I WILL be modelling in a post very soon. If you can help (and I know it’s tough at the moment!!) we would be so grateful ❤️ #goingforgold #CCAM @neuroblastomaUK

Will Alan take the challenge?

Last month Alan, 44, stunned fans on Instagram with his own weight loss.

The Chatty Man star revealed in an interview with The Sun that he took inspiration from Adele for his transformation.

The star claimed the book saved her from being “stressed and disheveled”.