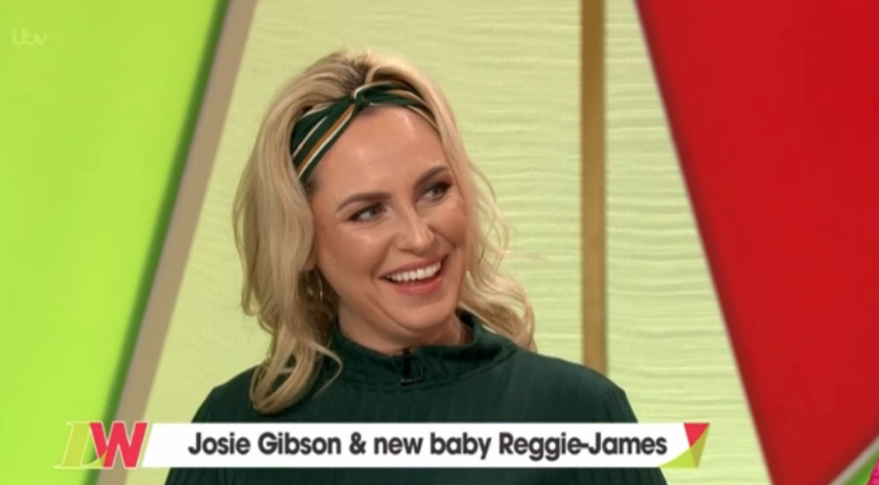 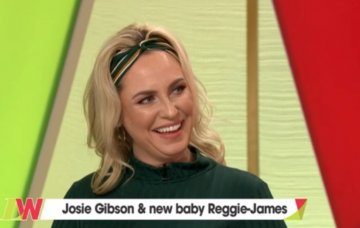 Josie Gibson’s baby son Reggie-James made his TV debut on Monday as he joined her on Loose Women.

The former Celebrity Big Brother winner welcomed her first child on September 9 after her waters broke ahead of schedule while dancing at her baby shower.

As the panel introduced the adorable tot, Josie, 33, cradled her sleeping little boy as she opened up about life as a new mum.

Holding her baby boy up towards the camera, Josie said: “Here’s your big debut Reg. What I do is I keep everything and I email it to him so when he’s older he can look back and see [what he did].”

Nadia Sawalha then took Reggie to have a cuddle with him while Josie opened up about her little boy.

Josie said: “You can have him for as long as you want, I need to catch up on some sleep!”

Gushing over her bundle of joy, Josie continued: “I was never a baby person before but the love you feel when you’re handed your baby – it’s just a knockout love.”

Josie admitted the sleepless nights are beginning to take their toll on her, adding: “It’s the best but it’s also the hardest job I’ve ever done.”

Josie also spoke about her son’s name and said she picked it because it just sounded “quite nice”.

Jane Moore reminded Josie that she had vowed not to call her baby James as it meant he would share a name with her ex, John James Parton.

Josie explained why she had named her son Reggie-James and it had nothing to do with her ex.

She said: “I didn’t even think about it when I was naming him. You don’t think about your exes. I think Reggie-James sounds quite nice.”

She went on to discuss her relationship with boyfriend Terry and how it’s changed since welcoming their son.

Josie admitted: “I basically Googled, ‘why don’t you like your partner after pregnancy?’ I do feel bad for him because after birth you’re in paper pants for two weeks so he’s had to see me walking around with paper pants on.

“And then he can’t do anything right. He really does try but I pick on him. I say to him, ‘how do you build a house when you can’t put a nappy on straight or sterilise a bottle?’

“But he does all the cleaning so I can’t fault him, but I do feel sorry for him he’s got to put up with me.”

The doting mum also spoke about how her waters broke when she was dancing at her baby shower.

She said: “As I [bleep-]dropped [Reggie-James] went right down and his head was in my canal. Where I was dancing so vigorously because I didn’t want Debbie [Bright] to win this dance off, he took the bag with him.

“I went to the toilet and came back. I said either I’m sweaty or my waters broke.”

Josie also admitted she would consider travelling to America to have gender selection treatment to have a little girl.

She said: “I would do it. Before I’d say oh just get what you’re given but now I really want a baby girl.

“I heard you can go to America and get one for about £10,000 so it’d take a bit of a saving. But I think if you’ve got a boy and a girl you don’t have to mess around and have loads then.”

What did you think of Reggie-James on Loose Women? Leave us a comment on our Facebook page @EntertainmentDailyFix and let us know what you think.