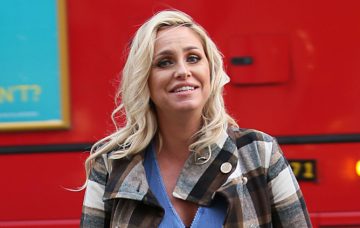 Pregnant Josie Gibson has vowed she’ll “never have sex again” after her waters broke early at her baby shower.

The former Big Brother champion was taken to hospital after a bout of energetic dancing at the party made her waters break early.

As she awaits the birth of her first child, she shared a video to Instagram Stories declaring: “I’ve come up with the decision that I am never, ever having sex again.”

Josie, 33, earlier posted a clip to Instagram showing the dancing she’d been doing that led her waters to break.

She was seen dancing vigorously with friends including TOWIE star Debbie Douglas.

In the caption, Josie wrote: “I just got so competitive!! Best baby shower ever!! So good it left me in hospital.”

The reality star also jokingly asked if she was entitled to a free meal because her waters broke in a restaurant.

Josie also told fans: “I think the moral of the story is not to [bleep]-drop when you are nine months preggers and maybe not be so competitive in our traditional dance off… at the hospital I think this is going to be a long old stint!!

Fans have rushed to send Josie well-wishes and share their own stories of waters breaking in less than expected places!

When it was confirmed Josie’s expecting a boy, Coleen handed her the blue bunch.

She has been dating property developer boyfriend Terry, 48, since last year but has declined to reveal his surname or even show his picture on social media as he wants to maintain his privacy.

She said recently they had been struggling to agree on a baby name they both liked.

“It changes every week. I have all the name charts but I can’t find one I love. Then, if I like one, Terry doesn’t. I think we’ll just know when the baby arrives,” she told Reveal magazine.

Well, it won’t be long now!

Have you got any baby name suggestions for Josie? Leave us a comment on our Facebook page @EntertainmentDailyFix and let us know!