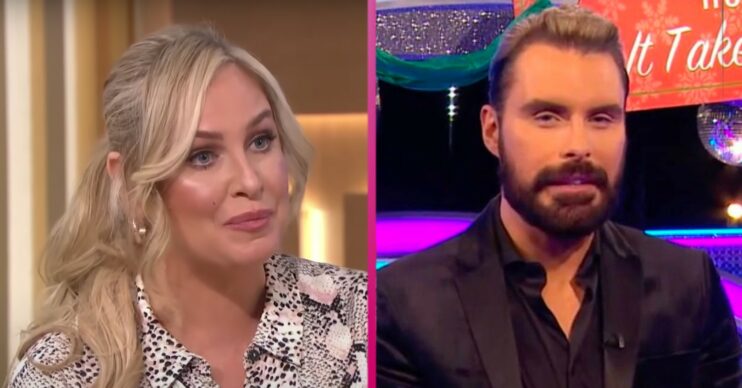 Rylan is "back on track"

Josie Gibson has sparked concern for Rylan Clark after sending a message to “one of the nicest men in showbiz” yesterday (Thursday, February 17).

Josie‘s message to the 33-year-old came during a period where Rylan was “resting” away from social media.

What did Josie Gibson say about Rylan Clark?

I am sending so much love to one of the nicest men in showbiz @Rylan you are so loved, so bloody gorgous and more importantly you have a beautiful heart.❤️❤️❤️❤️

Last week, Rylan announced on his Twitter that he was resting after a hosptial trip. It has been a difficult few months for the star.

“I am sending so much love to one of the nicest men in showbiz @Rylan,” Josie tweeted on Thursday.

“You are so loved, so bloody gorgeous and more importantly you have a beautiful heart.”

Josie’s tweet went out to her 343.9k followers, however, it didn’t get the reaction Josie was probably expecting.

How did Josie’s followers react?

Josie’s tweet seemed to worry a few of her followers. It is likely because her tweet seemed to have come out of nowhere, leading to many of her fans speculating that something had happened to Rylan that they didn’t know about.

“What’s wrong with Rylan?” one of Josie’s followers asked.

“What happened to him I’ve not heard anything,” another said.

“@Rylan we hope you are OK? You make all our family smile. You are so lovely. Never forget that,” another tweeted.

Plenty of Josie’s followers jumped to show support for Rylan in the replies too.

“Love you Rylan you are loved by so many a true legend. Sending so much love,” one fan said.

“You are amazing Rylan. We all love you here at mine, your personality is amazing and you’re such a warm person,” another said.

“Rylan is ace as you are Josie,” a third said.

What has Rylan Clark been up to recently?

Fans needn’t have worried too much, as Rylan was back on screens last night as he hosted The One Show, alongside Alex Jones.

At the beginning of the show, Rylan and Alex briefly spoke about how he was doing.

“So how are you, because we’ve been worried,” Alex asked.

“Oh, you know me, just had a little drama, didn’t I,” Rylan said, brushing it off.

He then went on to say that he is a lot better now, which Alex was glad to hear of.

“Had a little bit of a dodgy time, but I’m good,” Rylan said. “You’re looking well. Back on track,” Alex said.

It’s been a difficult time of late for Rylan, who split with his husband last year. He has been open about his mental health struggles since the split.

He also revealed that he had been rushed to hospital at the start of the month after he was forced to pull out of his radio show with the flu.