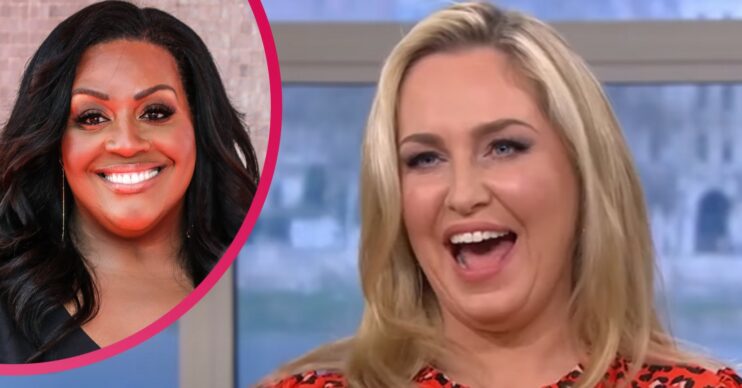 Josie Gibson has shared an adorable photo of her son with “aunty” Alison Hammond.

The This Morning star revealed she took her son Reggie, three, to work with her on Friday.

In the cute photo, Alison is seen smiling at Reggie who is beaming at his mum Josie behind the camera.

Read more: This Morning under fire from viewers for treatment of Josie Gibson

Meanwhile, another This Morning team member smiles alongside Alison and Reggie.

“Thank you to all my @thismorning family @davidobrien75 @dermotoleary and @momona09 for keeping Reggie entertained.

“He loved coming to work with Mummy.”

Fans loved the image with many gushing over Reggie and Alison’s bond.

One said: “What a lovely little boy, you can tell he loves his aunty Alison.”

In addition, another wrote: “Reggie a little legend @josiegibson85 just like his mum who is a legend to.”

Alison and Josie have previously opened up about their close bond.

Last December, Alison and Josie spoke about their friendship.

Alison told OK! Magazine: “Josie and I are really close. We spoke to each other every day during lockdown.”

In addition, Josie added: “Alison actually got me through lockdown. She was there for me on the phone every night, and we decided to get very spiritual together.

Alison and Josie on This Morning

“I love her. Being around Alison is like having a permanent hug.”

The pair have also hosted This Morning together before too and viewers loved it.

Following their joint hosting stint in February, one viewer said on Twitter: “Absolutely loving Josie and Alison on today. Best coupling in years.”

Meanwhile, another tweeted: “Absolutely loved Alison and Josie presenting this Friday’s #ThisMorning I would love them to present more often.”