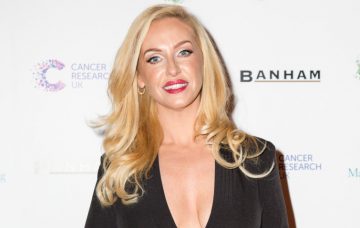 She is seven months pregnant with her first child

The former Big Brother champion told Reveal magazine she’s finding it tricky to narrow down names and any name she does like, her partner Terry isn’t keen on!

Josie, 33, said: “It changes every week. I have all the name charts but I can’t find one I love. Then, if I like one, Terry doesn’t. I think we’ll just know when the baby arrives.”

She added that Terry – who prefers to remain out of the spotlight and never features on Josie’s social media – will be an “amazing” dad as he’s already father to a 23-year-old son.

Josie, who is seven months pregnant, said Terry’s son is “looking forward to having a half-sibling”.

“We also have our friends’ children over sometimes and Terry is brilliant with them. I don’t have to do anything – he does all the running around!”

When it was confirmed Josie’s expecting a boy, Coleen handed her the blue bunch.

She began dating property developer Terry, 48, last year but has declined to reveal his surname or even show his picture on social media as he wants to maintain his privacy.

Josie agreed with the panel that it was lovely to be with a man she could trust, who was a friend of her family.

“That’s been the most difficult thing, finding one I can actually trust,” she said.

“When you’ve been stabbed in the back you’re so careful. It’s so lovely we know each other.

“I didn’t look at him like that at first, don’t get me wrong, but he did grow on me! He had to plaster the house and weed the garden and then I thought he was a keeper!”

Josie added: “I said to my partner the other week, ‘I’ve never felt richer’. He said to me, ‘What do you mean? You’re not as rich as you used to be’. I said, ‘I know that love, but when you wake up in the morning and you’re excited to be alive that is pure wealth, proper, proper wealth’.”

Have you got any baby name suggestions for Josie? Leave us a comment on our Facebook page @EntertainmentDailyFix and let us know!