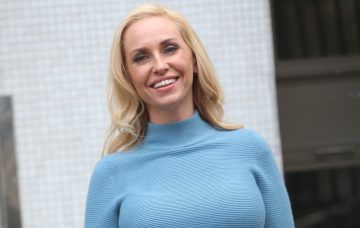 Josie Gibson is pregnant with her first child

The reality favourite confirmed the happy news to Closer magazine, saying she’s over the moon and still slightly in “shock” about it!

She said: “We are so excited! I feel so relaxed and calm. Although I think I’m still in shock.”

Josie, 33, is dating a property developer called Terry, but has always kept him well away from the limelight, choosing to keep their romance to themselves.

However, she revealed at the start of the year things were serious and the couple had even discussed marriage.

She told the mag: “We left our first scan and I just looked at Terry and said, ‘What have we done?!’ Life is going to change a lot, but we are so happy.”

Josie is currently five months pregnant and has chosen not to find out the sex.

The baby news came after Josie suffered a heartbreaking miscarriage in November at 11 weeks pregnant.

Josie met Terry last summer, after she endured two love splits in the space of just a few months.

She separated from her fiancé, Luke Sanwo after a rocky few years in February 2017, and then fell for Sam Player, before they split in May after just six weeks together.

The Bristol-based star rose to fame as the winner of Big Brother’s eleventh series in 2010.

She entered Ultimate Big Brother later that year and has gone to appear in Channel 4’s The Jump and qualify as a personal trainer.

Josie has not yet shared any baby bump pictures to social media; all of her latest posts have been of just her face or snaps with her midriff cleverly disguised.

She spent her Bank Holiday camping in the sunshine in Devon, sharing a lovely picture of herself lying in the grass with her dog next to a motorhome.