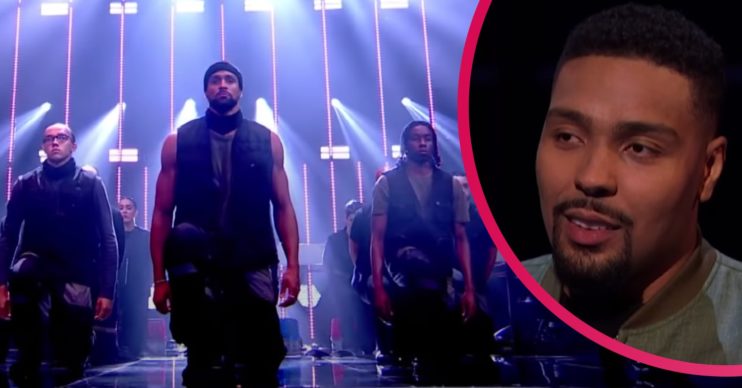 Diversity star reveals how his family were targeted by vile abuse

Jordan Banjo has opened up about terrifying threats made against his family in the wake of Diversity’s BLM-inspired dance performance.

He admitted he was staggered by the violent nature of the threats during a recent podcast appearance.

What Jordan Banjo revealed on the podcast

The TV favourite told how his property was damaged by crazed vandals.

But Jordan also reflected on how his kids were the subject of shocking, hateful and deeply menacing remarks, too.

He also suggested he received abuse before the Britain’s Got Talent performance last September.

But he noted that TV moment had led to an increase in the number of threatening posts made about him.

Read more: Lose Weight Like Me on C4: How did Jordan Banjo lose more than 10 stone?

Jordan said on The British Entrepreneur podcast: “When I’m sat at home and you’re telling me really horrible stuff like, ‘Your kids are so ugly, they should die’, ‘I hope your kids get caught in a house fire’, it’s crazy stuff, mad.

“Especially since last year when we did that performance on BGT. From then, it was like a red rag to a bull.”

Jordan continued: “There were some people who had a genuine grievance with it. And then some people, when this whole storm was kicking off, tried to antagonise you. I’m talking thousands upon thousands of messages.

“Even my car’s had cement thrown all over it, my Aston. It was crazy.”

Jordan went on to add how else the social media hostility has manifested itself in reality.

He continued: “I don’t live in a huge, gigantic house. I just live down a normal road.

“There were times when I’ve been in my office – my garage is converted – and I came out and people are trying to climb out over my garden gate.

How Jordan reacted at the time

Jordan had an emotional reaction to the backlash in the days following the BGT performance, which resulted in over 25,000 complaints to Ofcom.

He said during an appearance on his KISS FM radio show: “Of course you get some critiques but normally it’s focused on the dance.

“But this one was different, it was really important, it was special to us.

“But we also got bombarded with messages and articles of horrible stuff about us, about our families, about how even now Diversity not diverse enough because there’s only five white people in it.”

Jordan continued: “I can’t speak for anyone else it’s sad, it’s sad, genuinely.