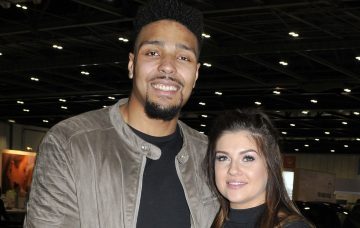 Jordan Banjo’s girlfriend Naomi Courts has said she’s “so lucky” to have the Diversity star in her life.

The couple welcomed their first child together, Cassius Ashley Banjo, last week, and are now settling into life as a family of three.

The little lad’s face was obscured from the camera.

She told fans: “Daddy appreciation post. I am honestly so lucky to have this guy, he is actually perfect. I love you so much.”

Naomi’s loving tribute came just days after Jordan posted a message of his own, praising his other half following the birth of Cassius.

He described Naomi as a “super woman” and “absolutely amazing” in a post to announce their son’s arrival.

Jordan said: “Words cannot describe the feeling of seeing your future come into this world. I’m so proud of mum & baby, both are doing absolutely amazing and Naomi, you are a super woman. If I didn’t know it before, I do now, I am the luckiest man there is.”

Jordan and Naomi kept their son’s birth to themselves for two days before telling the public.

Dancing On Ice backstage presenter Jordan explained: “We haven’t shared this straight away because we wanted to take some time to appreciate and enjoy the beautiful moment that we had as a family.”

The couple met four years ago on a night out in Essex, and friendship turned to romance just over a year later.