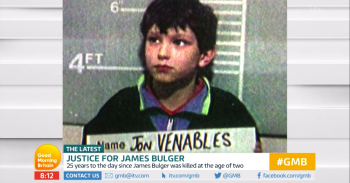 He could be out soon

One of James Bulger’s killers – Jon Venables – has applied for early release from the prison where he is serving time for illegally downloading images of children.

Jon Venables was aged 10 when he and and Robert Thompson snatched two-year-old James from a shopping centre in Bootle, Merseyside.

They tortured little James and then killed him, in a case which shocked the nation.

The notorious crime happened in February 1993, but it was not Venables’ last brush with the law.

Both killers served eight years in juvenile detention before being released on licence and handed new identities.

I don’t believe he will stop until he has killed again.

But Jon ended up back behind bars after he was caught with pictures of children being sexually abused.

“He went on to commit more crimes against children. I don’t believe he will stop until he has killed again,” Ralph said.

Venables, now 36, is currently serving a 40-month sentence and passed the half-way mark in October.

On Friday, the Parole Board confirmed a review of his case had been referred. It said it would now determine whether a hearing needed to take place to decide if he should be released.

There is a suspected monthly backlog of more than 1,000 cases waiting to be heard by the Board due to the coronavirus outbreak, according to The Sun.

Some hearings are being held remotely or decided “on paper” because of social distancing rules.

However, the board is keen to avoid judging certain serious cases without a face-to-face trial, delaying those cases where appropriate.

In August, James’s mum Denise Fergus urged the board to deny Venables’ early release and “finally admit this man is a threat and danger to society”.

The killer has shown “no remorse or any signs of being rehabilitated”, she claimed.

Do you think Jon Venables has paid for his crimes or should he remain behind bars? Go to our Facebook page @EntertainmentDailyfix and leave a comment to have your say.