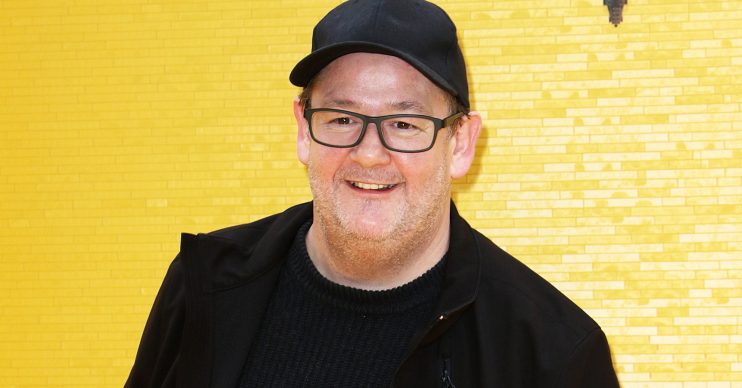 He had to explain what it meant

Comedian Johnny Vegas has apologised to fans after causing panic with a cryptic tweet telling them he would see them “in the next life”.

The Benidorm actor, 49, tweeted the message to his 388k Twitter followers and many of them rushed to ask if he was doing okay.

The St Helens-born funnyman wrote: “See you in the next life x. Night all.”

See you in the next life x
Night all

One fan responded: “What… please tell me you are okay?”

A third said: “Was just going to bed. Now I’m probably not going to get a wink worrying about what this means.”

Others quickly clarified that Johnny’s words were actually a quote from the film Midnight Run.

Someone told others: “I’m so pleased this was in reference to #midnightrun. Had me a tad concerned!”

Johnny later clarified that it was a quote from the 1988 Robert De Niro movie, which he said is a personal favourite.

He tweeted to one of his followers: “I’m absolutely fine. Apologies to anyone who hadn’t read my earlier Twitter thread, I was merely quoting the end of a favourite movie, Midnight Run.

“Sorry if it lead to unnecessary concern, all grand here.” 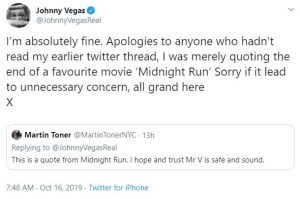 In the summer, the Still Open All Hours star had to reassure fans he was okay after falling at a gig.

During an event at St Helens Citadel that marked the venue’s closure, Johnny was reportedly seen standing on top of a potter’s wheel and singing New York New York towards the end of his set.

Sorry if it lead to unnecessary concern.

But he wobbled, fell off the wheel and landed on his face, according to The St Helens Star.

He later took to social media to insist he was fine, tweeting to fans: “Thanks again for being there. It’s not a night out, it’s a memory.”

It followed an incident last year that caused a surge of anger among audience members at the Laughterhouse Live Comedy Club Variety Show in Liverpool’s famous Philharmonic Hall.

Reports at the time said the comedian appeared to ‘collapse’ on stage and was escorted off during his stand-up routine.

Far from showing concern, some fans demanded that he “sort his [bleep] out”.

Laughterhouse Live’s official Twitter account responded to one disgruntled fan and claimed the collapse was “part of the act”.