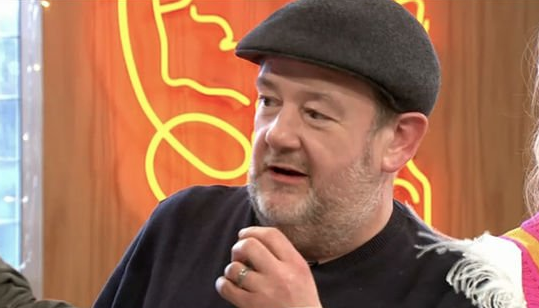 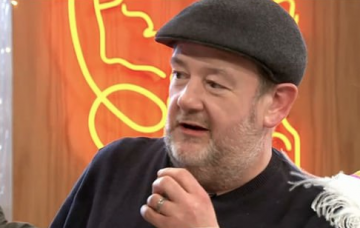 Comic Johnny Vegas has cheekily revealed he faked his considerable weight loss with a camera app.

The heavyweight star, believed to have tipped the scales at 18 stone at his heftiest, confessed he tinkered with his appearance earlier this year to make it appear he had shed even more timber than he had.

But the stand up favourite, 48, still insists he has dropped over four stone – even though the image of him looking much thinner in the face wasn’t an accurate snapshot of his bulk at the time.

Appearing on Channel 4’s Sunday Brunch today, Johnny ‘fessed up to having editing the dramatic pic.

“The weight loss wasn’t shocking… it took ages!” he joked.

Accused of sucking in his cheeks, the Benidorm actor fired back: “No I didn’t!

“I used an app, joking, and I posted it. It did look a bit shocking.”

Johnny also jested the selfie from July, shared with his followers on Twitter, made him look as if he was ill.

“It did look like I should be in a TB hospital,” he quipped.

The comedian previously credited a series of famous chefs – including Sunday Brunch presenter Simon Rimmer – for his transformation, revealing they had  helped him avoid sugar in his diet.

And while it seems those lifestyle changes boosted his weight loss hopes, the changes to his appearance were not as substantial as his photo tease suggested.

However, notorious wind up Johnny – who left some members of the audience furious with his antics during a recent gig – has repeatedly told how he has been inspired by his young son Tom to shift some bulk.

Sadly, it was announced in May that Johnny and Tom’s mother – the comic’s wife of seven years, Maia Dunphy – had split.

Johnny also has a teenage son, Michael from a previous relationship.