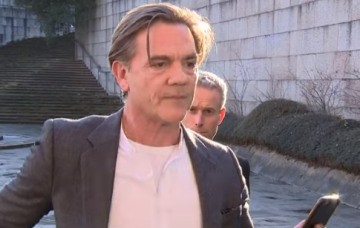 Ceon Broughton has been jailed for Louella Fletcher-Michie's manslaughter

Holby City star John Michie has said his grieving family “are broken” as Louella Fletcher-Michie’s boyfriend was found guilty of her manslaughter.

Ceon Broughton was convicted on Thursday of manslaughter and guilty of supplying a Class A drug to 24-year-old Louella. Today he was sentenced to eight and a half years in prison.

In a victim impact statement read out by the actor, he said: “I wake up every morning to face life starting again without Louella, our daughter, our sister, our friend, our family now broken.

“And for what? It makes no sense our beautiful Louella should still be with us on any measure of humanity.”

He continued: “No more yoga with my daughter, no more running around the outside of the Arsenal stadium with my daughter. Her life was cruelly cut short. Our lives forever diminished. She was wise beyond her years and trusting, too trusting it seems.”

Louella’s mum Carol said: “On the outside we all look much the same as we did before, but inside our hearts and souls have been ripped out, trampled on and stuffed back in.

“Like losing a limb, waking up every day to face this new reality, having to learn to live with this for the rest of our lives.”

She finished: “There are no winners. We don’t think Ceon is evil. He was stupid, massively selfish and he lied. My hope is that he has learned that truth is all we have ever really got.”

Louella’s sister Daisy also issued a heartbreaking statement in court, saying: “Our lives have been torn apart by the actions of someone who was supposed to have loved Louella – the most loved person I know.”

The previous day, outside court, the actor said his daughter’s death is a devastating a life sentence for her loved ones.

“We began our life sentence on what would have been Louella’s 25th birthday. Ceon’s life sentence is knowing he didn’t help Louella to live,” he said.

Louella’s boyfriend failed to get adequate help when the 24-year-old took an overdose of illegal party drug 2C-P at Bestival in 2017.

Broughton, 30, had given Louella a “bumped up” hit of the Class A drug, and then reportedly laughed and mocked her as she “screamed like a wild animal” and clawed at herself before her death.

He then abandoned her in secluded woods after filming her dying moments on his phone.

The court had heard Broughton was concerned he would get into trouble with police if he called for help as he already had a suspended prison sentence.

A medical expert had previously revealed Louella had a 90 per cent change of survival had she got the help she needed early enough.

As the verdict was read out in Winchester Crown Court, John and wife Carol were in the gallery.

The jury took just nine hours to return a verdict and the conviction was a unanimous decision.

Louella was just one hour shy of her 25th birthday when she died in September 2017.
Her parents had raced to Dorset from their London home after hearing Louella screaming in the background during a call with Broughton.

Her older brother Sam then sent Broughton a message telling him to get Louella to the medical tent.

Broughton’s defence claimed he had acted as he did because he thought Louella was just “having a bad trip” and didn’t realise she was dying.