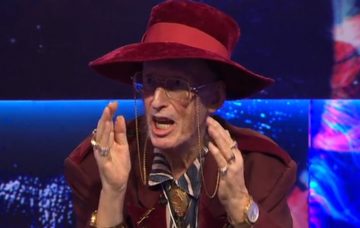 He didn't expect to see the year out

Celebrity Big Brother star John McCririck, whose death has been announced today, foreshadowed his demise in a sad interview about his health last October, announcing: “I don’t expect to be alive this time next year.”

The gaunt TV star had lost three stone in weight as he battled chest problems and severe flu.

The 79-year-old told the Daily Mail: “Life is empty. I don’t expect to be alive this time next year. It’s a question of slipping away.”

John added that he’d even warned his wife of 47 years, Jenny – who he called Booby – of his impending death, explaining: “I’ve prepared the Booby for it. When I’m gone she knows exactly what to do and she’ll be fine.”

The TV star blamed not being able to work anymore for his deterioration. He worked for Channel 4 for 28 years, before being let go in 2012.

The former Celebrity Big Brother housemate said: “What purpose is there in going on if you’re not working? Racing was my life but now when I go I think: ‘What am I doing here?’

“I feel like a dinosaur. You’re a lost soul wandering around an environment you’re no longer part of.”

John spoke about the same topic during  an appearance on This Morning, a month earlier.

He told presenters Holly Willoughby and Phil Schofield: “Ever since I was sacked in 2012 by Channel 4 Racing, you feel depressed. You lose a purpose in life. I wake up now in the morning and what have I got to do?

“I’ve got Jeremy Kyle and This Morning to watch, I have no purpose in life.”

John explained: “I’m getting better slowly. I had the flu but it was far worse than that. It absolutely flattens you.

“I couldn’t speak for about three months. It really was awful and you get weaker and you’re on antibiotics.

“Then I got a chest infection and I’m weaker but recovering slowly.”

Tragically, John’s health continued to deteriorate and his agent broke the news about his death earlier.

The statement said: “Award winning journalist, broadcaster and for many years the face of British horse racing, John McCririck, passed away at a London hospital on Friday 5th July aged 79.

“John’s interest in horse racing and betting began at Harrow where he was the school bookie. On leaving he worked for an illegal street bookmaker then legally on-course where he learned the art of tic-tac, clerking bets and making a book.

“John cut his teeth in racing journalism on Formindex, a tipping sheet otherwise known as The Golden Guide. He went on to write for The Sporting Life where he won British Press Awards, ‘Specialist Writer of the Year’ and ‘Campaigning Journalist of the Year’.

“John jointed ITV in 1981 for Shergar’s Derby then became a household name as part of the Channel 4 Racing team when they took over coverage of the sport in 1984. His flamboyant broadcasting style from the heart of betting ring proved extremely popular with racing fans and beyond.

“John continued to work for Channel 4 Racing until 2013 as well as satellite channel At the Races. In this time he transcended the world of racing, appearing on numerous mainstream TV news and light entertainment programmes including Question Time, The Weakest Link, Celebrity Wife Swap and Celebrity Big Brother in 2005 and 2010.

“He is survived by Jenny, his wife of 48 years. His funeral will be private.”

Leave tributes for John on our Facebook page @EntertainmentDailyFix and let us know what you think.