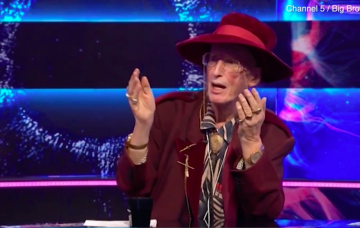 The horse racing pundit has given a health update

Celebrity Big Brother star John McCririck has given a sad new interview about his health, announcing: “I don’t expect to be alive this time next year.”

The gaunt TV star who was a controversial contestant on last year’s CBB, has lost a shocking three stone in weight as he battles chest problems and severe flu.

Speaking to the Daily Mail, the 78-year-old said: “Life is empty. I don’t expect to be alive this time next year. It’s a question of slipping away.”

John says he’s even warned his wife of 47 years, Jenny – who he calls Booby – of his impending death, explaining: “I’ve prepared the Booby for it. When I’m gone she knows exactly what to do and she’ll be fine.”

The TV star blames not being able to work anymore for his deterioration. He worked for Channel 4 for 28 years, before being let go in 2012.

He says: “What purpose is there in going on if you’re not working? Racing was my life but now when I go I think: ‘What am I doing here?’

“I feel like a dinosaur. You’re a lost soul wandering around an environment you’re no longer part of.”

John horrified fans earlier this month with an appearance on This Morning, when he denied he was dying.

John McCririck set the record straight today over concerns of his health and recent weight loss, telling Phillip and Holly that he has 'no purpose' in life after being sacked from Channel 4 Racing in 2012. pic.twitter.com/j8Pj4Zwqsn

And again, he rallied against his sacking.

He told presenters Holly Willoughby and Phil Schofield: “Ever since I was sacked in 2012 by Channel 4 Racing, you feel depressed. You lose a purpose in life. I wake up now in the morning and what have I got to do?

“I’ve got Jeremy Kyle and This Morning to watch, I have no purpose in life.”

John explained: “I’m getting better slowly. I had the flu but it was far worse than that. It absolutely flattens you.

“I couldn’t speak for about three months. It really was awful and you get weaker and you’re on antibiotics.

“Then I got a chest infection and I’m weaker but recovering slowly.”

Are you sad to hear about John? Leave us a comment on our Facebook page @EntertainmentDailyFix and let us know what you think.