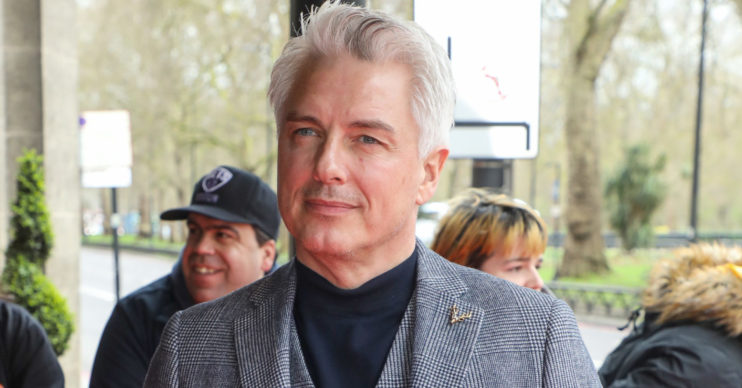 The star has not stepped near a pair of scissors for weeks!

TV’s John Barrowman has shown off a seriously impressive head of hair after shunning the ‘Covid-cut’ trend.

John, 53, has been isolating at his Los Angeles home and refused to copy the likes of David Beckham by shaving his head.

As a result, the Dancing On Ice judge is now sporting a huge grey barnet – and fans have gone wild.

Read more: Ricky Gervais calls for NHS heroes to get New Years Honours – and for celebs to be banned

John gave his followers a glimpse of his hair while baking a retro pineapple upside down cake.

Sharing a video on Instagram, he said: “I’m baking a cake everyone.

“Here is my #fabulized version of a Pineapple Upside Down Cake. I look like sh*t as I did it before I took a shower this morning.

“It’s a treat for @scottmale I also took half round to my mum and dad. Let me know if your gonna try it and what you think in the comments. And don’t be all f***ing judgy lol #fabulous jb .”

But rather than commenting on the cake, fans seemed more excited by John’s hair!

One commented: “Fabulous!!! Omg your hair has gotten so freakin long, truly not fair … why are long lashes, full brows, and fast growing hair wasted on men?”

Another wrote: “You and the cake look FABULOUS!!!! I love your hair more, though!”

Comparing the Torchwood star to a Dr Who of times gone by, a third added: “Hairstyle war. John Barrowman vs Peter Capaldi (in his run as the Doctor).”

This is not the first time John has got people talking about his hair.

Last year, John shocked fans by turning up to film I’m A Celebrity…Get Me Out Of Here’s spin off, Extra Camp, with a new ‘do.

The star later appeared on ITV1’s Lorraine and explained the reason behind his changed look.

He told Christine Lampard: “I did it for my 50th birthday. I shaved my head and let it go grey.

“My husband Scott looked at me and said, ‘I’m not ready for this’. So I waited another two years.

“And just to be honest with you, when I’m travelling and in another part of the world, just to get my hair coloured is really difficult, so I decided it’s gone. This is me.”

John said he will refuse to colour his hair again unless it is for an acting role.