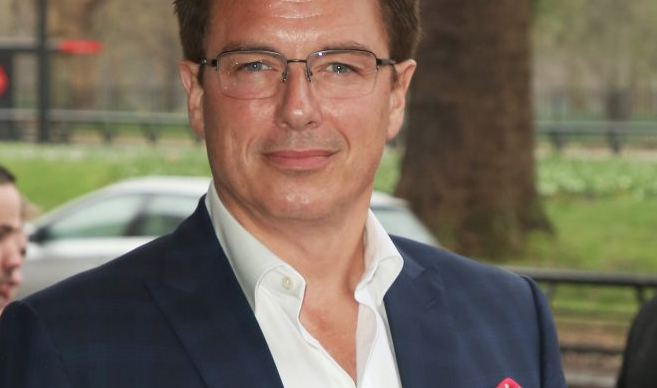 Some "very big" needles have been inserted into musical star's neck

Former I’m A Celebrity star John Barrowman has revealed he has undergone multiple procedures after sustaining a ‘severe neck injury’ which left him unable to move – including having some “very big” needles inserted into his spine.

The musical acting star yesterday cancelled dates of his Christmas live tour in Bristol and Glasgow after revealing he was too injured to perform.

And today he has updated his Instagram followers about his progress in hospital, letting them know he has received intraspinal injections to help reduce the inflammation.

The 52-year-old told fans before the procedures: “Hi everyone, it’s 2.30 in the morning and I’ve just had to wake up and take another pain killer and inflammatory.”

#fanfamily I had an MRI and they’ve found the root of the problem which is a C5/6 facet joint injury. Hopefully a series of intraspinal injections will reduce inflammation and get me back up & running again in time for Monday’s show in Manchester. Fortunately Glasgow was able to reschedule us to Tuesday night so I’m looking forward to that too! @scottmale #stevengill (my brother-in-law the #neuro surgeon) #NotFeelingSoFabulous but a massive blessing to have you all out there sending your positive thoughts and messages. Thank you. However can’t sleep #worry @deccarecords @cuffeandtaylor jb

Read more: B&Q is selling glitter paint to bring a touch of sparkle to WALLS for only £5

Referring to his husband, John also noted what he medical attention he expected to undergo.

He continued: “Scott says I’m going to have some small needles… and some very big ones put into my neck, so I’ll let you know how it goes.”

It was a bit uncomfortable.

John later shared snaps of an MRI scan showing his injuries and explained it suggested he has suffered a C5/6 facet problem – a a joint injury near the top of his spine.

“Hopefully a series of intraspinal injections will reduce inflammation and get me back up & running again in time for Monday’s show in Manchester,” he said.

Waiting for the procedure. Jb

A few hours later John posted further pics – including one of a plaster on his neck covering where the needles had gone in.

“Procedure done. It was a bit uncomfortable,” the actor noted.

He also thanked fans for their support, saying: “A massive blessing to have you all out there sending your positive thoughts and messages. Thank you.”

ED has contacted a representative for John for comment.

Procedure done. It was a bit uncomfortable. Jb