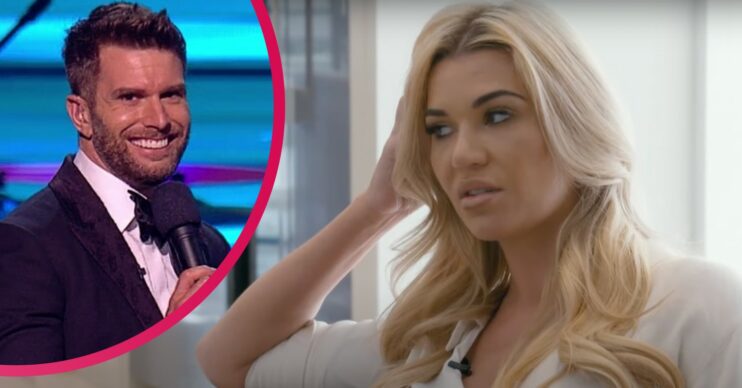 The comedian has finally responded to Christine's accusations

Christine claimed that she was left “sobbing” and “mortified” after being mocked during the filming of Joel’s TV show, Hey Tracey!.

What did Christine McGuinness say?

Christine, 33, who is married to comedian Paddy McGuinness, spoke about the “bullying” in her autobiography. The book, titled Christine McGuinness: A Beautiful Nightmare, detailed the incident which left her “mortified”.

Recounting the experience, Christine said one of Joel Dommett’s Hey Tracey! co-stars overstepped the line with her. The woman allegedly said: “I have no [bleep]ing idea who you are.

Read more: Strictly The Real Full Monty star Christine McGuinness’ traumatic past from rape as a teen to dad’s addiction

The Real Housewives of Cheshire star said that the incident left her “sobbing, upset, and mortified”. Christine then said that the unnamed woman had tried to make amends later on, claiming her words were just “banter”.

How has Joel Dommett responded?

Now Joel Dommett, host of the show, has broken his silence on Christine’s bullying claims. Joel spoke to The Sun about his feelings on the matter.

“At the end of the day, it is a comedy show. It was made in jest,” Joel said.

“I don’t like anyone to feel like they went away from the show unhappy. No one expressed their concerns to me but I do like to make sure everyone is happy if they are on a show with me,” he continued.

The 36-year-old then went on to say that he hoped Christine was “ok”. He also revealed that he’d reached out to Christine’s husband, Paddy, after hearing of the incident.

What else did Joel Dommett say in response to Christine McGuinness?

He told the 48-year-old comedian that Christine had done “really, really well” on the show.

Joel Dommett then said that he didn’t want her to feel the way she did after filming her appearance on the show.

“I would never like anyone to feel like they are sad after a show of mine,” Joel added.

Christine made a series of appearances on the show between 2017 and 2020. However, she reportedly rejected the opportunity to become a full-time panelist on the show.

Christine’s claims of bullying were one of many shocking revelations made in her new autobiography. In the book, Christine also spoke about growing up with her heroin-addicted father, and how she blamed herself after being raped at 13.

The star most recently appeared in Strictly the Real Full Monty on ITV. She appeared alongside stars like James Jordan and Ola Jordan, Love Island‘s Teddy Soares, and Duncan James from Blue.

What do you think of Joel’s response? Leave us a comment on our Facebook page @EntertainmentDailyFix and let us know.