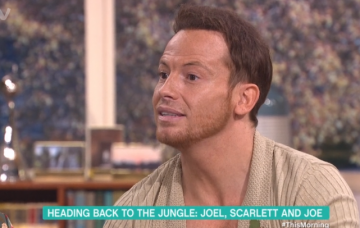 She heads off to Australia very soon

Joe Swash has admitted he’s not sure how Holly Willoughby will handle the creepy crawlies when she heads to Australia to co-host I’m A Celebrity… Get Me Out Of Here!.

The presenter appeared on Tuesday’s This Morning alongside his Extra Camp – the show’s spin-off – co-stars Scarlett Moffatt and Joel Dommett as they discussed the upcoming series of the show.

While talking about the Bushtucker trials and Holly’s fear of critters, Joe, 36, revealed that there are “thousands” of bugs on the ground during the trials.

Host Phillip Schofield asked the trio: “You know what it’s like and you know the show back to front, how is [Holly] going to do?”

Joe replied: “I know Holly is scared of creepy crawlies – sometimes [at the live trials] there’s thousands of bugs on the floor.

“So when you look [at the floor], you get sea sick because it looks like it’s moving! I’m not sure how she’ll handle that.”

He added: “But it’s so nice to have someone there who hasn’t experienced it before.”

Phil joked: “She is petrified of everything. I saw her last night at the Pride of Britain Awards and that’s the last time I’ll see her before she flies out.

“And as I gave her a hug, I burst out laughing. She jumps at a bluebottle!”

Scarlett admitted she’s “so excited” to have Holly, 37, on the show.

She said: “It is very heavily testosterone based, I’m excited to have Holly there!”

Mum-of-three Holly previously admitted that there’s three things she’s not looking forward to in the jungle – the eating Bushtucker trial, the smells of the trials and when contestants come out of the trials with creepy crawlies all over them.

Meanwhile, her co-host Dec Donnelly admitted he was “pleased to hear” she’s “scared of everything” because he likes the thought of “watching her during the eating trials”.

Speaking about Holly joining him Down Under, Dec said in a statement in August: “I’m thrilled she said yes. It will be a different kind of series but we will try our best to ensure it is no less fun and eventful for our loyal viewers.

Holly also revealed her children – son Harry, nine, daughter Belle, seven, and four-year-old son Chester – will be coming with her, which means she’s been speaking to their schools about how that will work.

She’s filling in for Ant McPartlin as he takes the rest of the year off to focus on his sobriety.