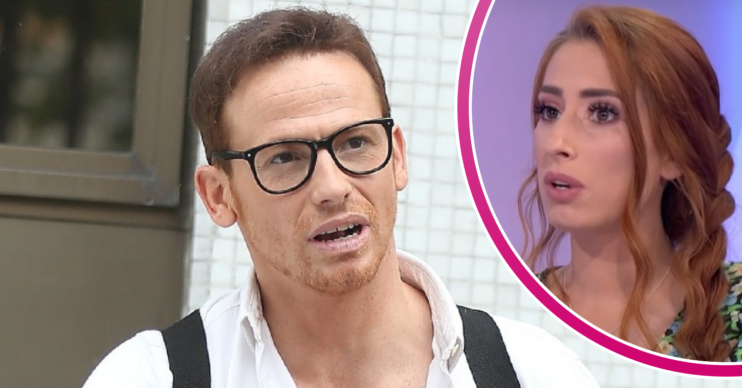 It's a bad habit he hates

Joe Swash has ‘banned’ one bad dinner table habit from the house he shares with Stacey Solomon.

The actor, 40, previously revealed that he doesn’t like people being on their phones while they eat a meal – as well as loud chewing!

Joe, who appears on Jeremy Pang’s Asian Kitchen this weekend, took part in a Q&A for Peperami’s ‘Ban The Bland’ campaign in August 2021.

What Joe Swash has ‘banned’ from home he shares with Stacey Solomon?

He explained: “We have a rule in our house that phones are banned from the dinner table – the kids are on them enough!

Read more: Stacey Solomon upset over son Rex’s milestone as she returns from hen do

“Stacey and the kids would say I eat really fast – like someone is about to take my food away from me.

“I also tidy around people when they are still eating!”

After being together since 2016, the pair have merged their families together. The couple and their three children have since been joined by son, Rex, and baby daughter, Rose.

Their wedding was postponed from the original July 2021 date to this year, after Stacey fell pregnant with Rose.

They are set to marry in a small ceremony in the back garden of their house, which they named Pickle Cottage.

But things didn’t exactly get off to a winning start with Stacey and Joe – with Joe recalling the first time he ever met his wife-to-be.

Speaking to Metro in 2021, Joe revealed that on their first meeting, he was left slightly horrified. Joe, who was meeting Stacey as she left the jungle after winning the 2010 series, gave her a hug.

He said: “Did you know that she smelled worse than any other campmate that came out of the jungle?

“Oh my God. Honestly! I remember meeting her and I distinctly remember the smell!”

But, luckily, Stacey’s post-jungle aroma didn’t put him off too much, and the pair have gone on to build quite the life together.

Reflecting on the significance of the show, he said the pair “love” it.

Joe added: “Me and Stacey, we love I’m A Celebrity, we’ve got a great affinity with the show. We both went on it, we both won it. And we both worked on it.

“And when we look at our kids, it’s all because of the jungle, really.”

Jeremy Pang’s Asian Kitchen next airs on ITV on Saturday, July 23 at 11.35am.