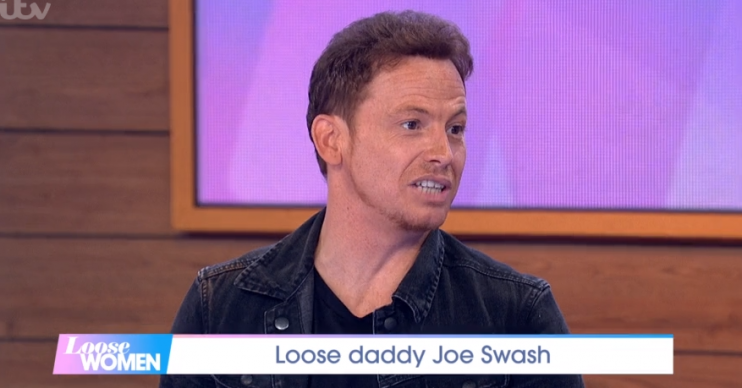 Joe Wash appeared on Loose Women today (Friday June 14) and revealed that when his wife, Stacey Solomon, gave birth to their son Rex three weeks ago it turned into a real family affair.

Joe, 37, told the panel and studio audience that Stacey’s sister – a nurse in the next ward – popped in to help out.

Joe told the panel: “Her sister works in the ward next door so she came in and put the gloves on to help give birth.

“She turned around and it was like a slipper slide – boom, wow, it was out straight away, I’m not even joking! We nearly had to catch it. I was like a wicket-keeper.”

With Stacey’s sister helping out, Stacey gave birth to Rex Toby Francis Swash, her third child and her first with Joe.

Joe also revealed more about the birth, and that he had to nip to Mothercare to get supplies at a crucial moment.

“We didn’t have a nappy bag packed or anything, I had to run to Mothercare to get everything literally outside the hospital,” he admitted.

He also said that he’s a natural born worrier, and it took Stacey to calm him down.

Joe continued: “If the baby doesn’t breathe for about five seconds, I poke it.

“Stacey goes, ‘Will you stop poking the baby? Let it sleep!’ But he’s beautiful. They’re so resilient, I think it’s us parents that feel more vulnerable.”

After the birth Joe gushed on Instagram that Rex is the spitting image of him.

“I know I’m a bit biased but this kid is so handsome,” he said.

“And he’s got his daddy’s forehead!”