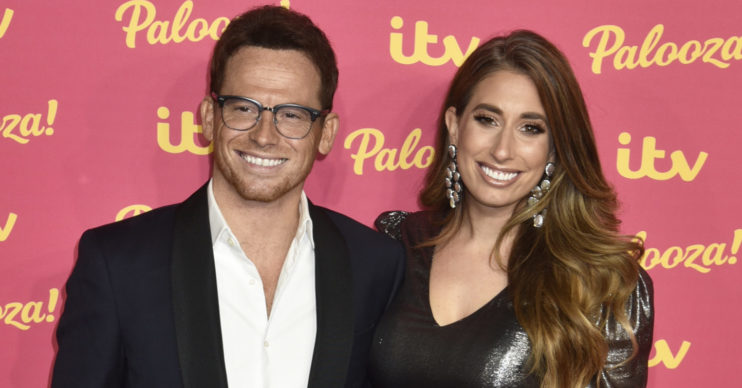 Bemused Stacey Solomon left Joe Swash fuming yesterday after he discovered she had sneaked into the loo for a bit of time out.

Stacey, 30, grabbed herself a chocolate bar and glass of diet coke before disappearing into the toilet to hide.

But her joke didn’t go down well with boyfriend Joe…oops!

In a now-deleted Instagram video, Stacey filmed the moment she was caught out.

And Joe, who had been looking after one-year-old son Rex, could be heard yelling in the background.

He fumed: “You’re upstairs having a Daim Bar and I’m down here having the baby, cooking the dinner.

“Go on, have a lovely day, enjoy yourself.”

Using the nickname she calls Joe, Stacey rolled her eyes and said: “Calm down, Hoe.”

Go on, have a lovely day, enjoy yourself.

But the 38-year-old star only ranted even more, as he thought she had said “hun”.

Stacey posted the amusing video online for her 3.4 million followers with the caption: “I’m actually laughing so much.

Read more: Joe Swash compares Stacey Solomon to a dictator as they argue on Gogglebox

“He found me in the bathroom. He thought I said Hun.

“He’s so funny when he’s cross. He thinks he’s Cinderella!”

Stacey even added seven ‘crying with laughter’ emojis and a black heart, just to prove she was jesting.

But the video – thought to be filmed on Friday (June 19) evening – is no longer available to see.

The good news is, Stacey and Joe had definitely kissed and made up by bedtime.

Loose Women star Stacey later posted a clip of them snugged up together on the sofa.

The cute couple were getting ready to watch themselves back on Friday night’s Celebrity Gogglebox.

Stacey also shared another sweet snap of herself and Joe in bed with Rex this morning.

“Good morning! Pickle had a crazy night (my fault for the late nap) so I’m going to put my phone in a drawer for the day and try to catch up on some sleep.

“But before I do, there’s a couple of things I need to do…”

Unfortunately, Stacey then went on to leave her fans with that cliffhanger before vanishing off line.

What a mystery, though we’re glad to see all’s well that ends well!