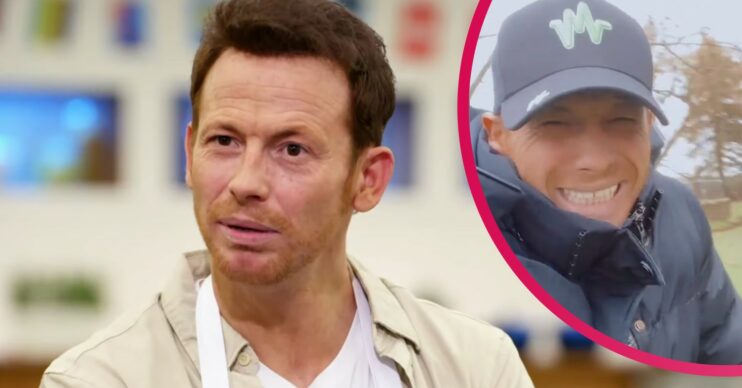 Joe Swash was swept up in some horrific weather caused by Storm Eunice at his home he shares with Stacey Solomon.

The 40-year-old actor could only watch in horror as the storm wreaked havoc on the garden of Pickle Cottage, the couple’s home.

Joe took to Instagram earlier to show the havoc Storm Eunice is having on Pickle Cottage’s garden. He shared a short video on his Instagram story for his 1.9 million followers to see.

As he was swept up in the storm, Joe couldn’t believe just how much damage the winds were causing.

“What is happening? This wind is unbelievable! Look!” Joe shouts as the wind throws everything it’s got at him.

He then turned to show that the storm had knocked a tree over in his garden.

“We’ve already lost a tree – what’s going on?! This is madness!” he shouts as the video ends.

Where is Joe Swash’s fianceé, Stacey?

Meanwhile, whilst Joe battles Storm Eunice at Pickle Cottage, Stacey is away from home, wrapped up warm away from the storm with baby Rose.

Stacey shared an update of her own on Instagram today in which she explained to her five million followers why she’d been so quiet on social media recently.

The 32-year-old posted a picture of herself breastfeeding baby Rose, with a lengthy caption earlier today.

“Sorry I’ve been so quiet!” Stacey wrote. “These filming days are super long and any breaks I get I’m like this.”

“I’m missing the boys so so much. Two sleeps down two to go,” she continued. “I hope you’re all ok and keeping safe in this crazy storm.”

The star signed off, saying she couldn’t wait to get home.

Other celebrities affected by Storm Eunice

It hasn’t just been Joe who’s been affected by Storm Eunice!

Last night (Thursday, February 17), just as the bad weather started to gain a foothold in the UK, Dawn French had to be rescued after her car broke down.

The star uploaded pictures of AA staff members helping her get her car back on the road on her Twitter for her 568.9k followers to see.

Plenty of her followers sent their well wishes to the star, with many hoping that she got home safely as the weather took a turn for the worst.

“Get home safely, and batten down the hatches!” one fan wrote.

Dragons’ Den star Deborah Meaden has also been affected by Storm Eunice, as she made clear in a tweet earlier today. The 63-year-old revealed that she’s worried about her cat who hasn’t been home since the storm started.

Plenty of the businesswoman’s followers sent their support following the distressing news.

“Awww I understand the worry but they are tough and clever, it’ll be hiding away somewhere,” one of her fans said.

“Fingers crossed he’s OK. I’m sure he’ll have the sense to stay hidden,” another said.