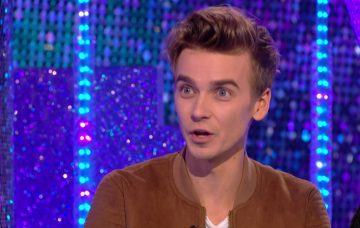 He took the plunge

Joe Sugg joked he would colour his hair red if he made the Strictly Come Dancing final – and he’s stuck to his word!

The vlogger revealed his wild new hairdo on Strictly spin-off It Takes Two on Wednesday night.

He didn’t look too happy as he pointed to his flaming locks, but at least he now matches professional dance partner Dianne Buswell!

As they sat down to chat to host Zoe Ball he joked: “I’m a man of my word!”

He added: “It’s alright. I can’t say anything bad because, obviously, Dianne wouldn’t like that.”

However, he may not be braving the look for the actual final of the show.

When Zoe asked if he’ll be keeping it for the finale, he seemed slightly hesitant.

Joe said of coming this far: “It still hasn’t really sunk in yet. I feel so lucky and privileged to still be a part of this competition.”

This weekend, he will go up against fellow celebrities Faye Tozer, 43, from Steps, Pussycat Doll Ashley Roberts, 37, and 31-year-old documentary maker Stacey Dooley.

And Joe’s been taking more extreme measures than just changing his barnet ahead of the big show.

He has been having brutal ice baths every day after rehearsals to help ease his aching muscles.

Sharing a video by the tub on his Instagram Stories, the YouTube star said: “Now it’s become part of my daily routine, to keep my body working”.

You’ll certainly stand out on the dancefloor if you keep your new hair, Joe!

The Strictly Come Dancing final starts at 6.30pm this Saturday on BBC One.

Who do you want to win the Glitterball trophy?  Leave us a comment on our Facebook page @EntertainmentDailyFix and let us know what you think!