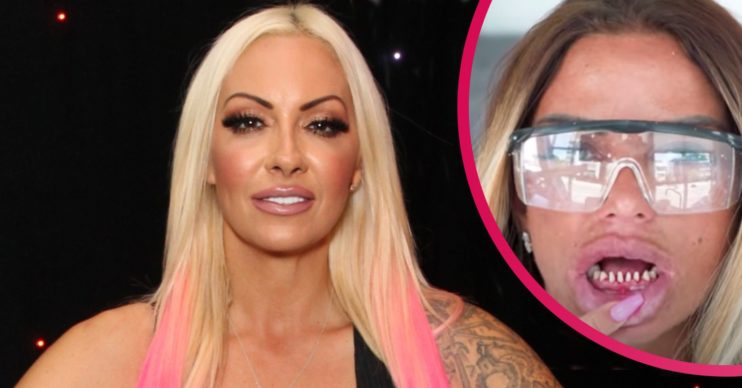 Jodie Marsh and Katie Price have long been bitter rivals

Jodie Marsh has taken a cheeky swipe at Katie Price on social media.

The former glamour models were once bitter enemies, and it seems Jodie, 41, still can’t help but mock Katie, 42.

Taking to Twitter, Jodie posted a string of laughing crying face emojis after a fan shared a snap of Katie having her veneers replaced.

The fan wrote: “I remember when I were in school and the lats used to love Katie Price and I used to say nahhh she’s trash and I said Jodie Marsh were 10x better. Well who’s got the last laugh now? [sic]”

What has Jodie Marsh said about Katie Price?

Back when Katie was known as her alter ego Jordan, Jodie made a name for herself by being her rival.

The pair mocked one another in the press throughout the mid-noughties.

The feud appeared to die down, but has reared its ugly head a few times over the past decade.

In 2011, Jodie told Now magazine that she reckons Katie was ‘threatened’ by her.

She told the mag: “I’ve never known her to be pleasant! I think that when I got famous, she felt threatened by me because before I came along, she was the only big name in glamour modelling.”

What happened to Katie’s teeth?

Then in 2015 Katie lashed out on Twitter accusing Jodie of sleeping with her exes.

She tweeted at the time: “Didn’t you go out with my ex’s names written over your body marking them out of ten after you [Bleeped] them (classy)? Well you have [bleep] nearly all my leftovers and not one of them wanted you (gutted).”

As for the photo Jodie appears to be mocking, it shows Katie getting her veneers replaced.

I remember when I were in school and the lads used to love @KatiePrice and I used to say nahhhh shes trash and I said @JodieMarsh were 10x better. Well, who’s got the last laugh now? 🤢 pic.twitter.com/OIFiJ5d9BQ

The mum-of-five jetted off to Turkey last month to get ‘his and hers’ veneers with new love Carl Woods.

She shared the at times gruesome process on her YouTube channel.

Before getting the new veneers secured in place, her old ones were completely removed.

This revealed her natural teeth, which were exposed as small and jutted.

Poking fun at herself she compared her stripped back teeth to like a ‘James Bond villain’.

Unfortunately on the same trip she broke both of her feet, and is due to receive surgery any day now.