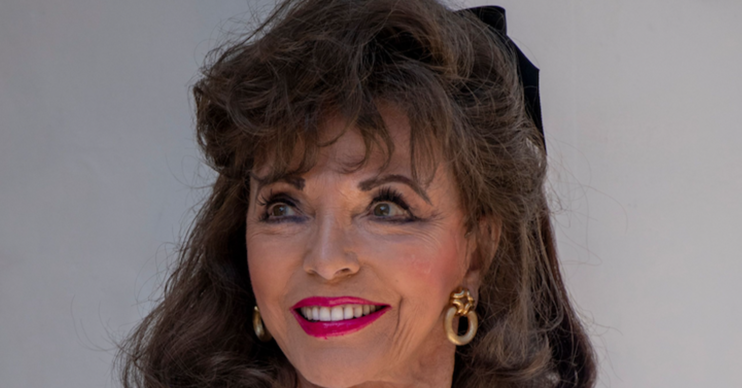 Joan Collins has wowed her legions of fans with a racy throwback bikini photo.

The Dame, 87, looks sensational as she poses in a black two-piece.

She shared the image in view of her some 209,000 Instagram followers.

Joan Collins looks as glamorous as ever

Joan would have been 47 at the time.

Fans rushed to show their appreciation for the vintage shot.

One user praised: “I think next to Marilyn Monroe, undoubtedly the most beautiful Gemini woman in the world.”

Another user gushed: “No airbrushing and stunning” and yet another posted: “Amazing. Wow. Bet you don’t look too different today. Xx.”

Enjoying the #lastraysofsummer circa #1980 #1980sfashion #fashion

Indeed Joan looks just as fabulous in a bikini today.

The actress recently shared a photo of her in a similar style bikini while lounging in St. Tropez.

Still incredibly slim, she looks as fantastic as ever.

While Joan may have had some cosmetic treatments along the way, she also swears by several beauty secrets.

She says she has never even dabbled with junk food.

Born just months after The Great Depression ended, she says she never overate as a child.

And this discipline continued into adulthood.

Speaking to Good Housekeeping, Joan said: “We didn’t have junk food. We were given cod liver oil every day and had to eat our greens.

“It’s sad to me to see older women getting heavy and losing their joie de vivre.”

And speaking to Grazia she says she’s helped keep the wrinkles at bay by avoiding exposure to direct sunlight for decades.

She said: “I used to fry myself in the sun. Ever since I was 18 in the South of France, I’d turn a mahogany colour using a combination of baby oil and iodine.

“But the second I went to Hollywood I met my mentor who told me I’d be a crocodile if I carried on sitting in the sun.”

Joan is married to her fifth husband, Percy Gibson.

The couple married in 2002 and split their time between their central London and St Tropez, France homes.