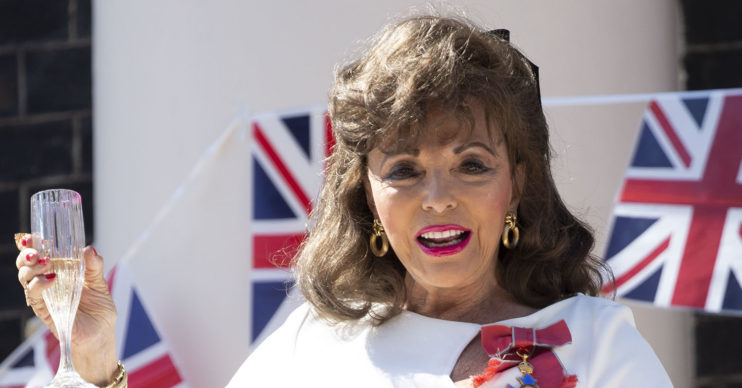 A French gendarme too umbridge!

Joan Collins says she got into a heated verbal fight while on holiday in France.

The Dame, 87, says she was thoroughly told off over not wearing a proper face mask.

A style icon, she says she wanted to experiment with her face coverings a bit.

Mixing it up, she wore a plastic face visor for a trip to a local Ikea while staying at her St Tropez residence.

However, this didn’t go down well at all with a French policeman, who scolded her choice.

What happened to Joan Collins?

Writing in her column for The Spectator Joan explains: “An officious gendarme became deeply offended by it.

“And while I was mulling over the benefits of Ikea’s Gravadlax vs its smoked salmon, he pounced.

“Gesticulating in Gallic fashion, he yelled at me to put on a proper mask, because visors aren’t legal.

“Chastised, I slunk away, muttering an Anglo-Saxon expletive under my breath, which, as he glared at me, I feared he might have understood.”

Elsewhere in the article Joan lamented that she found traditional face masks difficult to breathe with.

She even compared them to ‘muzzles’.

Is Joan against face masks?

She said that several of her expected guests had cancelled as a result.

She was even expecting Julian Clary, but he changed his plans.

He told her that he didn’t mind spending a few weeks at home – but he couldn’t bear being away from his mother for that long.

At the beginning of lockdown, Joan seemed quite keen to adhere to regulations.

She was photographed jetting off to Los Angeles in a face mask and white gloves.

She also said on Good Morning Britain that she was being “very careful”.

Appearing in March, Joan said: “Everyone has got to be careful but that doesn’t mean I’m going to stop living my life.

“I went out to dinner last night, we went out with Biggins, we said we are not going to stop going out, even though the restaurant was half empty… you have to be really careful.

“That mask that I wore, it’s a special kind of mask. Percy found it on Amazon or one of those and it has a sort of thing that filters out everything.

“It was when I saw Naomi [Campbell] doing her cleaning of her [airline seat], I’ve been doing that for a couple of years now, she told me about it.

“I do wipe down my seat and I bought a big towel to sit on. I especially wipe down the metal clasp you put around your waist… and handles.”