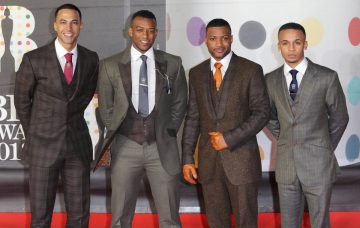 There could be some new music on the way...

Fans were left heartbroken in 2013 when X Factor favourites JLS announced they were calling it a day.

In the music biz, band break-ups can often be caused by ‘creative differences’, or major bad blood between the members.

However, that’s clearly not the case for the JLS lads, who have publicly supported each other’s careers in five years since the split.

And now they’ve taken to Instagram to show the world just how close they still are, posting a pic of them all cracking up over something – share the joke, guys!

All four of the mega boyband posted the same cute pic with different captions.

Aston Merrygold joked: “Ok fellas let’s catch a pose like we actually still like each other for the gram…’ ‘but we do’ ‘oh yeah'” complete with plenty of crying laughing emojis.

Marvin Humes offers a bit more insight into their crazy night, captioning the pic: “It’s always the same… nothing changes… laughing and joking until 4 in the morning…”

Oritse Williams kept it simple, with the hashtag #familia and the “100” emoji.

JB Gill went with the cryptic “About last night…” with a crying laughing emoji, some prayer hands and a red heart.

Fans were delighted and hoped the photo could be the biggest sign yet a reunion could be on the horizon.

One confident fan commented: “We know you’ll get back together one day and when you do it will be amazing.”

Another was so excited they felt all caps was needed to fully get the point across, commenting: “PLEASE DO A REUNION TOUR. I MISS JLS SO MUCH.”

One clever fan used lyrics from JLS’s hit ‘Beat Again’ to suggest what the boys might be talking about, with the comment: “‘Let’s just get back together, we should have never broke up….'”

Last year, Marvin teased the idea of a reunion by saying “never say never” when the subject came up in an interview.

It’s a decade since they rocketed to fame on The X Factor – hopefully a ten-year reunion is on the way this year!

Are you excited for a JLS reunion? Leave us a comment on our Facebook page @EntertainmentDailyFix and let us know what you think!