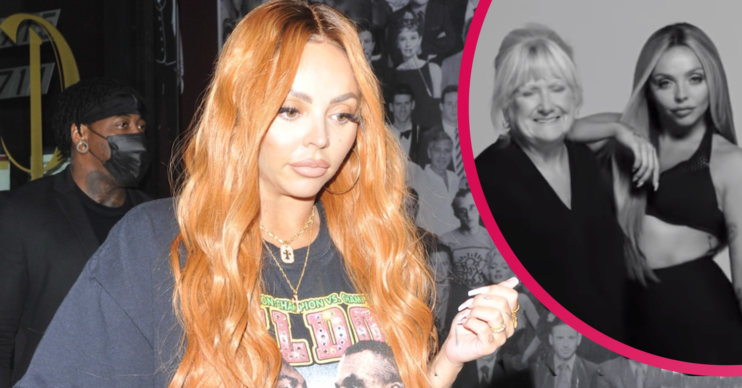 Our thoughts are with Jesy and her family

Former Little Mix star Jesy Nelson brought nostalgia back to Mixers after sharing a touching tribute to her grandmother today.

Sharing some clips from their 2018 hit Strip on her Instagram, Jesy told her followers that her ‘Nanny Ginge’ has sadly died.

Jesy wrote: “My beautiful Nanny Ginge, my heart feels so broken I don’t even have the words right now.”

“The most beautiful, kind hearted nanny in the world I feel so proud and so lucky to have shared so many beautiful memories with you.

“I’m gonna miss everything about you, you being cheeky and flirting with all the men and telling them to give you a kiss. Reggie and Oscar are gonna miss sleeping with you so much.

“I love you with all my heart nanny go rest with the angels now.”

What have Jesy’s fans said about her loss?

Jesy’s grandmother starred in the video and can be seen dancing alongside Jesy and her then-bandmates, Leigh-Anne Pinnock, Perrie Edwards and Jade Thirlwall.

30-year-old Jesy, who quit Little Mix in 2020, also shared personal photos of her and her much-loved nanny, including one of them holding hands.

Jesy’s army of fans have been quick to fill up her comments section with their condolences and sadness for her loss.

“Sending you so so much love Jesy stay strong! RIP to your amazing nanny,” wrote one supporter.

Another added: “Fly high, she was an amazing lady always loved seeing her at tour, she will be so proud of you and everything you do.”

“So sorry for your loss, she will be by your side forever,” wrote another.

A fourth said: “Rest in peace Nanny Ginge. We are so sorry for your loss Jesy, sending my deepest condolences and prayers to you and your family.”

Some of Jesy’s famous friends also sent love to the Bad Boyz singer.

Has Little Mix said anything about Nanny Ginge’s death?

Celebrity brow boss Sal of @Salihsworld wrote: “Thinking of you and family, Sending you all lot of love! Your nanny was the best all those times flirting with me she’s loved and always will be the best heaven has gained an angel.”

And Irish singer Sinead Harnett said: “Sending you so so much love sweetheart.”

At the time of writing this none of Jesy’s former bandmates had written anything publically on her page.