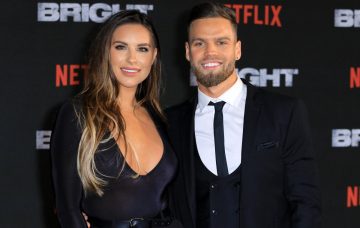 Their intimate wedding was attended by just 22 guests

The reality stars shocked fans on Sunday by revealing they’d quietly tied the knot at a private villa in Mykonos with just 22 guests in attendance.

Their wedding was exclusively covered by OK! Magazine, which published the first photo on the cover of this week’s issue.

Jess and Dom met in Love Island 2017 and got engaged three months later.

Dom told OK! Magazine: “People said we wouldn’t last but now we’re husband and wife. We’re proof that when you meet the right person, there’s no need to hang around.”

Jess added: “I knew we’d be together forever from very early on. I’m so excited to be Mrs Lever and to spend the rest of my life waking up next to Dom.”

There had been rumours the reality couple would have a lavish, star-studded wedding attended by their former Love Island co-stars, but in the end they kept the numbers low, inviting just 22 close friends and family members.

Dom explained: “We really wanted an intimate wedding and we knew we couldn’t have had that in the UK. Going abroad meant we didn’t have any pressure to invite every Tom, Dick and Harry.

“As we were limited on numbers, we only invited people we see all the time. Choosing who to invite made us realise who was really important to us.”

Jess also cleared up speculation Love Island’s Olivia Attwood had been chosen as a bridesmaid, saying that had never been the case.

The couple said they’ll throw a huge party back home in the UK and invite some of their celebrity friends including Olivia and former Love Island stars Sam Gowland – now dating Geordie Shore’s Chloe Ferry – and Chloe Crowhurst.

Read the full interview in this week’s OK! Magazine, out now!

Read more: Love Island winner shows off weight loss in before and after photos

She also addressed reports the wedding was “secret”, saying: “The word secret is getting thrown around a lot – nothing secret about it, just wanted a low key day with our closest friends and family and now we are back in the UK we are excited to share it with you all.”

The word secret is getting thrown around a lot – nothing secret about it just wanted a low key day with our closest friends and family and now we are back in the UK we are excited to share it with you all. 💕

The couple had previously staged a mock wedding on ITV’s Good Morning Britain back in February, taking part in a faux marriage ceremony presided over by Richard Arnold on Valentine’s Day.

Paying tribute to their Love Island roots, the couple stripped to white swimwear before saying their unusual vows.

They are the second Love Island couple to marry, after Olivia Buckland and Alex Bowen tied the knot in September.

Who has been your favourite Love Island contestant of all time? Leave us a comment on our Facebook page @EntertainmentDailyFix and let us know what you think!