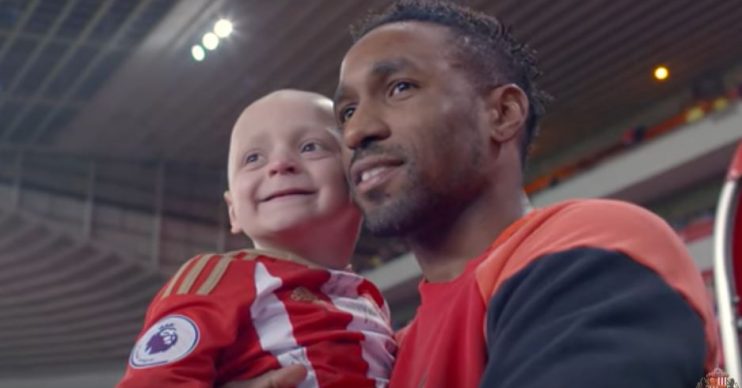 He had a rare form of cancer

Sunday (July 7) marked two years since the six-year-old passed away from a rare form of cancer.

After scoring for Scottish side Rangers against Oxford, Defoe took to Twitter and said his goal was for little Bradley.

Proud to get a goal today. Can’t believe it’s been two years. That one was for you, little man… 💙 pic.twitter.com/5PLF5DLBnR

He tweeted, alongside a blue heart: “Proud to get a goal today. Can’t believe it’s been two years. That one was for you, little man…”

Defoe formed a special bond with the youngster when he played for Sunderland, which was Bradley’s favourite team.

The two struck up a close friendship and Dafoe worked to raise awareness of neuroblastoma, the illness that took Bradley’s life.

Defoe was among those to visit him during his last few days.

Braldey’s mum, Gemma, marked the anniversary with a heartbreaking tribute to her son on the Bradley Lowery Foundation Facebook page.

“To be totally honest with you all, I really don’t know what to write. My heart hurts, my eyes are sore and all I want is my baby boy back.

“Bradley Lowery you are mammy and daddy’s own superhero. We love you lots and lots like chocolate drops, all the way to the stars and back again.”

Bradley was diagnosed with neuroblastoma when he was 18 months old. After undergoing treatment, he was in remission but his cancer returned in 2016.

His supporters managed to raise over £700,000 for him to receive antibody treatment in New York, but doctors discovered that his cancer had grown and informed the family it was terminal.

December that year saw parents Gemma and Carl told the boy had just months to live.

In May 2017, Gemma revealed her son had left hospital to begin palliative care at the family home.

Dafoe visited him for a final time on July 1, returning to the North East to see him after leaving Sunderland and signing for Bournemouth.