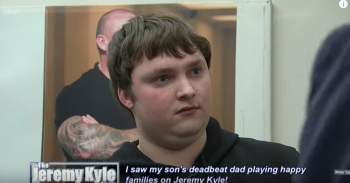 It got out of hand backstage

A Jeremy Kyle guest went off the rails today when he punched a wall on set after admitting to strangling his pregnant ex-girlfriend.

Young father Duane lost his temper after host Jeremy had to go backstage to confront him because he refused to appear in front of the audience.

Duane claimed he should be allowed to see his baby son, despite attacking the mother of his child when she was pregnant.

He shocked Jeremy, his ex and the audience when he ranted: “I strangulated her for a reason, she got me angry.”

Sparks then flew as 53-year-old Jeremy told him: “You’re a gutless little boy who attacks women.”

And when Jeremy demanded to know if he could justify being aggressive to a pregnant woman, Duane replied: “Yeah.”

Duane, who is now with someone else, then stormed off and punched the wall as he went.

An astounded Jeremy then told the camera: “Anger issues? Just a little bit.”

Viewers at home were digusted by what they saw.

One tweeted: “What a hard man he is. Punching a wall. Head in his hands crying. Boo hoo to you!!!”

Another accused the irate guest of having a “severe lack of brain”.

One fan insisted they wanted to turn off, commenting: “I’ve no time for this.”

A fourth was aghast at Duane’s confession, tweeting: “‘I strangulated her for a reason’
“(BEEPING) hell #JeremyKyle.”

Read more: Mum shocked as she gets telling-off note in child’s lunch box

The Jeremy Kyle team gave an update on the situation after the show aired today.

A post on the ITV show’s Twitter page read: “Duane is still receiving support from the show to deal with his anger issues, he is still in his relationship with Courtney and hopes to be able to start having contact with his son.”

Duane is still receiving support from the show to deal with his anger issues, he is still in his relationship with Courtney and hopes to be able to start having contact with his son