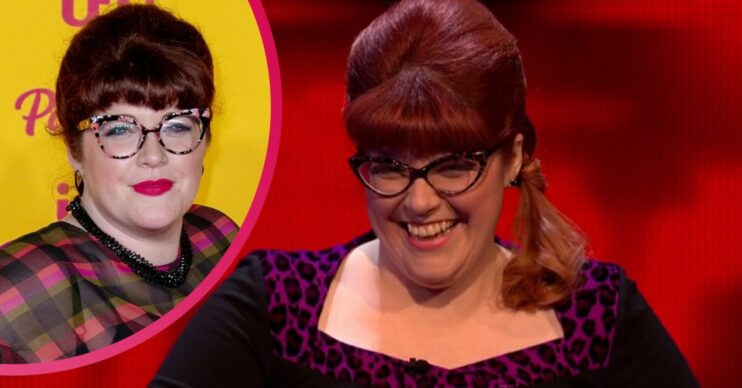 The Chaser ditched her signature glasses and beehive

Jenny Ryan left fans of The Chase stunned as she showcased her ‘natural beauty’ on social media.

The 39-year-old Chaser looked completely different from her on-screen character, The Vixen, as she went makeup free in the snap.

And fans of the ITV programme clearly approved!

Jenny ditched her signature black frames and makeup as she posed in the snap on Instagram.

Whilst fans may recognise the star for her beehive hairdo, she opted for soft loose curls.

Alongside the stunning shot, Jenny wrote: “Oh hey it’s the cover of that one outstanding folk album I released in 1975 before disappearing to live on a ranch in Arizona.”

It didn’t take long for fans to gush over the photo.

Taking to the comments, one said: “Absolutely beautiful. Such a natural beauty.”

A third wrote: “Natural beauty or what… simply gorgeous.”

A sixth commented: “Eat your heart out Stevie Nicks!”

Meanwhile, it comes after Jenny recently lifted the lid on her love life.

Sharing a picture of a male makeup artist touching up her face, she recently joked: “It’s been a while since I was last touched by a man this way. Dirty mirror appears courtesy of Elstree Studios.”

What happened on The Chase this week?

Jenny isn’t the only one to impress fans of the ITV programme.

Earlier this week, contestant Elise caught the attention of the viewers as she appeared on the show on Tuesday night (March 1).

As Elise went head-to-head with Shaun Wallace, viewers rushed to social media to share their thoughts on the stunning contestant.

On Twitter, one gushed: “Elise is very pretty #TheChase.”

Another added: “Elise is quite a looker tbf!”

The Chase continues on ITV, today, at 5pm.