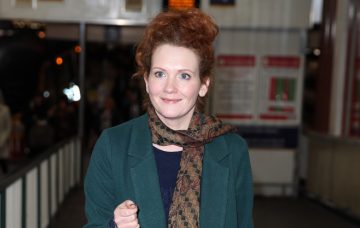 The soap star welcomed her second child, Hilda, on October 29

The actress, who plays cobbles stalwart Fiz, took to Instagram on Thursday morning to share a picture of the card little Albert, three, had written for his family.

It features three flowers made using cut-up orange and green tissue paper and the words: “To mummy, daddy and Hilda.”

Jennie shared the snap with the caption: “Big brother getting prouder of his little sister every day.”

Another wrote: “So cute! Massive congratulations, such a beautiful family.”

Others sent their congratulations to Jennie but also admitted they were sad Fiz would be bowing out of Coronation Street while Jennie is on maternity leave.

“Huge congratulations  Jennie. Love you on Corrie. Won’t be the same now your on maternity leave. Big love x,” wrote one.

In a message posted to Twitter, the soap star wrote: “Our newest addition arrived yesterday. Mummy and Daddy very happy. Big brother very proud of his little sister Hilda. We’re all in love.”

They had announced their second pregnancy via Twitter in April.

Corrie fans have suggested Jennie chose the baby name Hilda in honour of legendary Corrie character Hilda Ogden, but she’s yet to confirm that.

During an appearance on ITV’s Lorraine earlier this year, Jennie, 34, said it was likely her child would share a name with a Corrie character but suggested that was more because there have been SO many Corrie characters over the years it’s hard not to double up!

“We asked Albert if he would like a little brother or sister, which is probably a bad question, but luckily he said yes. The he said ‘but what am I going to call it?’ so he thinks that he’s got the job of naming,” she added.

Jennie, meanwhile, told OK! Magazine recently she’s keen to return to Corrie once her maternity leave has ended, even if she sometimes feels she’s “missing out” on things with Albert.

She described motherhood as the “best thing in the world”, adding: “I choose to work because I love my job and it feels like the right thing for us as a family but I do hate missing out on things with Albert.”

Will you miss Jennie on Corrie while she’s on maternity leave? Leave us a comment on our Facebook page @EntertainmentDailyFix and let us know what you think!